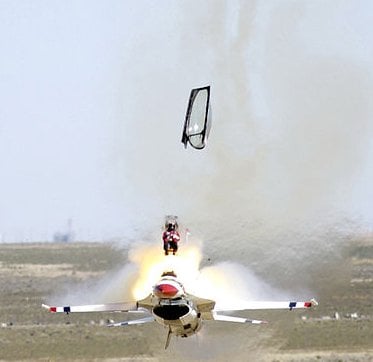 PHUKET (News Wires): The pilot of a U.S. fighter jet ejected safely yesterday before his aircraft crashed near a base in the western region of South Korea, military officials said. There were no injuries.

The accident happened at around noon local time when the single-seat F-16 Fighting Falcon aircraft crashed into a rice field in Hwayang, a village near the Kunsan U.S. Air Force Base in Seocheon county of South Chungcheong Province. The lone pilot ejected safely before the crash.

The aircraft, which was assigned to the 36th Fighter Squadron at Osan, was participating in a routine training mission as part of an annual joint military exercise, dubbed ‘Foal Eagle 2012’, between U.S. and South Korean forces. North Korea condemned the exercises as acts of war, but the U.S. said they were meant to protect the region and maintain stability on the peninsula.

“We are grateful the pilot is safe and that no one was injured,” Col. Patrick McKenzie, 51st Fighter Wing Commander, said in a statement, adding that a board of qualified officers will investigate the crash. “Our main priority now is conducting an investigation to determine what happened.”