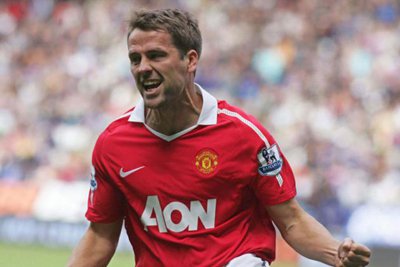 The 32-year-old striker is on the verge of a return after five months out through injury.

Ferguson believes the former England international can be an important member of the squad for the remaining seven matches.

“If you think about ever needing a player to score an important goal for you, is there anyone better than Michael Owen?” Ferguson asked United’s official website.

“He will be a really welcome addition to our squad, even if it were to be for the last few games of the season.”

Ferguson revealed that Owen had been due to return sooner but suffered a set-back in training.

“He came back into our training a couple of weeks ago and then after one of the sessions he did some physical work with the sports science team and overdid it,” Ferguson said.

“So it knocked him back a few days, but he should be joining us this week.”
F1 for Thailand – interview with Red Bull’s team principal
Phuket Gazette / News Wires

The Nation‘s Jintana Panyaarvudh talked to Horner about the challenges the world champions face, as well as the possibility of a Thai Grand Prix.

Why are you visiting Thailand this time?

It’s an opportunity to see our friend, Singha, an important partner. We have three days here. I got to see a vineyard and elephant race in Hua Hin.

Can you tell us what you discussed with Singha?

We talked about partnership and a longer-term relationship. They have been a very good and important partner of the team since 2008. So we looked to extend the relationship and look forward to the future.

Singha’s contract with Team Red Bull will end in November – do you plan to extend it?

It seems that Thai authorities want a Thailand Grand Prix; do you think we have the potential to host a Formula One race?

I think you will be very excited to have a Grand Prix in Thailand [judging by] how successful the race is in Singapore and India. So, it would be great one day to see Formula One here.

Where is our best racing circuit, Bangkok or Phuket?

Bangkok would be an obvious place to have the race.

What is the most important aspect to qualify as a Grand Prix host?

I think they need to talk to Mr [Bernie] Ecclestone [president and CEO of Formula One] [laughing].

Yes, a hundred thousand people attended the [Bangkok] event. I wasn’t here at that time but I saw the media coverage, which was fantastic.

How popular is F1 in Thailand when compared to other Asean countries?

You can see the support of Formula one in Thailand is growing. It’s great to see the Red Bull team are being followed.

Is it because Red Bull is so familiar to Thais?

Yes, we looked for red bulls [gaur] yesterday in the forest but couldn’t find them.

Do you plan to put a rising Thai star behind the Red Bull wheel?

I think we have a very good young British-Thai driver, Alexander Albon. He is in our Red Bull junior programme at the moment and we are interested to see how he will perform in Junior Formula. We will see in the next couple years how he develops.

How often do you come to Thailand?

Unfortunately, not too often. Thailand is such a beautiful country. It’s a great opportunity [I have a chance to visit Thailand] between [the races in] Australia and Malaysia. Probably at the end of the season and the Singapore Grand Prix we will come back again.

Do you enjoy your stays here?

Yes. This is my first time in Hua Hin. It’s very beautiful location. We went to a National Park yesterday. The scenery is stunning … to see many elephants in the wild is sensational. Thai people are very nice and friendly. The food is fantastic! The Singha beer is very good.

Will Red Bull strike back after the Australian Grand Prix?

We can always improve and develop. We have had some parts flown in from England. There will be development all the way to the Brazilian Grand Prix at the end of the year. So I am sure all the teams are pushing very hard.

What do you expect for the rest of the season?

I think it’s gonna be a good season. McLaren have started the year looking strong. Mercedes is looking in good shape. Red Bull has a lot of things in the pipeline. I think from circuit to circuit it will change. I hope we can be competitive in China.

After two years in a row as world champions, do you expect another triumph this year?

Our goal is to try and win the title for the third year. It’s a massive challenge. But our target is trying to defend both our [drivers’ and constructors’] titles.

Are you confident defending champ Sebastian Vettel will win his hat-trick this year?

I think it’s gonna be tough but we will fight very hard to retain both titles. But this year McLaren looks strong, Mercedes are fast. I think it will be a great season for F1.

Who is your fiercest rival?

I think it will change from track to track. But at the moment the McLaren look very strong.

Do you think Vettel, now 24 and already a double title winner, will break Michael Schumacher’s record of World Championship wins?

Schumacher is quite unique. It’s unimaginable to think that record could be broken.

Are you looking for a new driver, with Mark Webber’s contract set to end this season?

No, we are not looking for anybody at the moment. We are very happy with what Mark is doing.

The national team’s qualifying campaign ended with a whimper when they went down tamely to Oman 2-0 in Muscat last month, a result that consigned them to the bottom of the group. It was a disappointing end to a campaign that looked promising early on when they claimed four points in the first three games. If the Thais had no chance to make it to the final qualifying round, the public would have found it much easier to take it on the chin. But, the team, surprisingly, stayed in contention for a place in the last-10 team stage ahead of the Oman fixture.

However, the Thai side performed poorly, as if there were nothing at stake in the fixture. After going behind to an early strike, there was not a moment in the game thereafter that the Thais threatened to stage a fight-back to claim the win required of them to stand any chance of squeezing into the next round.

The fact that Thailand woul