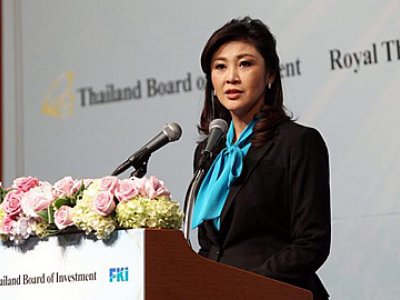 In a speech in Seoul yesterday during a luncheon meeting hosted by South Korea’s four leading business organizations, including the Federation of Korean Industries, she said the Thai economy would expand by 5.5-6 per cent this year, supported by strong economic fundamentals despite last year’s flood disaster.

Meanwhile, the Fiscal Policy Office yesterday revised its economic growth projection for the year to 5.5 per cent from the 5 per cent it had forecast in December.

Siam Commercial Bank’s Economic Intelligence Center also adjusted its target for growth in gross domestic product to 5.6-5.8 per cent from the 4.7 per cent estimated in January.

These developments follow the Bank of Thailand’s announcement last week of an increase in its 2012 GDP growth target to 5.7 per cent.

Yingluck told more than 450 attendees that with its solid fiscal status, Thailand is able to launch policies to promote investment.

The corporate tax rate will be cut to 23 per cent this year, and to 20 per cent next year, while tax incentives are also available to encourage the establishment of regional headquarters in the Kingdom, she said.

Meanwhile, the government has set aside US$72 billion (Bt2.16 trillion) for mega-projects, including a high-speed rail route from Bangkok to Chiang Mai and a deep-sea port in Dawei, Burma, which will improve Thailand’s linkage with Asean and South Asia. The prime minister said she was convinced the projects would strengthen Thailand’s position as a hub for Asean investment.

She invited Korean investors to pour investment into value-added industries such as electronics and electrical appliances, automobiles, machinery, alternative energy and agricultural processing. They were also urged to invest in research and development activities and software and entertainment businesses.

Attending the luncheon were executives of large companies such as Samsung, LG Electronics, Hyundai, Korea Water Resources Corp, SM Entertainment and Korea Railroad Corp. After the event, Yingluck engaged in one-on-one discussions with a number of companies, including LG, Samsung and Union Steel.

Meanwhile, although Thailand this year could run both budget and current-account deficits, the Finance Ministry has given an assurance that this is not yet cause for concern, according to the Fiscal Policy Office.

“Running a current-account deficit is not a bad thing, as we need more investment,” said director-general Somchai Sujjapongse. Investment in post-flood reconstruction would drive growth this year.

Private investment is expected to rise 11.9 per cent, against last year’s increase of 7.3 per cent, while public investment will expand 12.1 per cent after a contraction of 8.7 per cent experienced last year, due partly to post-flood reconstruction efforts.

High investment, however, will lead to a current-account deficit of 0.9 per cent of GDP, or about $3.5billion. The deficit will also partly be caused by an expected slowdown of exports, he said.

Headline inflation is expected to come in at 3.6 per cent this year, compared with 3.7 per cent last year. “So far, inflation is not as high as people had worried it might be,” he said.

Phuket Gazette / The Nation
PHUKET: Subscribers to the 3G service under CAT Telecom and True Corp group partnership deals should be able to relax – at least for the moment – despite the conclusion by an Information and Communications Technology Ministry committee that it found five ‘unusual practices’ in the way the deals were developed.

At the committee’s announcement of its final probe result on the deal’s legality yesterday, ICT minister Anudith Nakornthap said both CAT and True group could continue to do business under the deals.

He added that the probe focused on how the deals were made and who got involved, not on the 3G service deals themselves.

True sent a release to the press yesterday saying it declined to comment on the committee’s conclusion but reaffirmed the deals were made in full compliance with the law and regulations.

It said the committee’s conclusion did not have any impact on the deals and the offering of the TrueMove H service.

True subsidiary Real Move, which provides the 3G service under the TrueMove H brand, now has around one million users.

In its final conclusion on the deal’s legality, the ICT ministry’s committee found five unusual practices in the way the CAT-True 3G partnership deals were developed.

The committee said it was possible political interference resulted in CAT failing to take over Hutchison Telecom’s business in Thailand and paved the way for True group to do so instead.

CAT’s proposal to Cabinet on December 2010 that the Code Division Multiple Access cellular service should be discontinued and the 3G wholesale-resale service developed, did not comply with PM’s Office regulations on the investments with state agencies.

CAT also failed to comply with the then Cabinet’s order that CAT had to consult with state agencies first before launching the 3G service. CAT has asked the ministry to approve its plan to spend Bt12 billion to roll out telecom facilities to enhance its 3G service without making it comply with the 1992 Public-Private Joint Venture Law first. Anudith said he would have supported this plan if CAT had proceeded according to the law.

Anudith will announce in a few days which state agencies he will send the probe conclusion to for further investigation. They could include the Department of Special Investigation (DSI) and the National Anti-Corruption Commission (NACC) which has already scrutinized the deal’s legality. He will also conclude what CAT should do to remedy the situation to be in line with the committee’s conclusion.

He strongly denied any conclusion would be politically motivated to attack the previous government.

The Pheu Thai Party, then in opposition, also launched a censure debate against the previous ICT minister Chuti Krairiksh over the legitimacy of the deals.

The Senate’s good governance and anti-corruption committee concluded last month that the deals may have breached the 2010 Frequency Allocation Law. It forwarded its conclusion to the NACC and the National Broadcasting and Telecommunication Commission.

The NBTC will appoint a panel to scrutinize the deals by focusing on whether the deals violated Article 46 (2) of the frequency allocation law, which prohibits license holders like CAT and TOT from transferring the right to use their spectra to other parties, to act on their behalf.