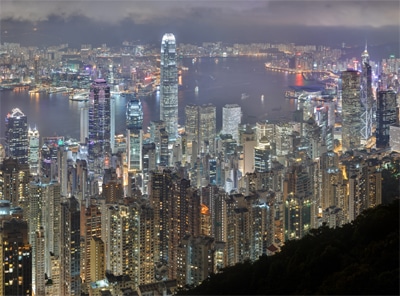 PHUKET: A severe typhoon lashed Hong Kong early this morning, injuring more than 110 people and causing flooding in several parts of the city, local authorities said. It is the worst typhoon to hit the area in more than a decade.

Maximum sustained winds of Typhoon Vicente reached nearly 140 kilometers (87 miles) per hour, the equivalent of a category one hurricane. The Hong Kong Observatory issued a level 10 typhoon warning, the most severe level, at the height of the storm but later downgraded it as the storm moved away.

At least 118 people, including 53 males and 65 females, had sought treatment at public hospitals as of 6am local time, according to the Hong Kong Hospital Authority. The youngest victim is 4-years-old while the oldest is 86-years-old, officials said. At least 52 people were admitted to hospitals, although their conditions were not immediately known.

The severe storm, the worst typhoon to hit Hong Kong since 1999, caused at least one landslide, flooding in five areas, and more than 310 trees were uprooted. More than 265 people have sought shelter at temporary shelters which were opened by the Home Affairs Department.

In addition to the injuries and damage, the storm has forced the cancellation of at least 44 passenger flights at Hong Kong International Airport and delayed more than 275 others.

As of 9am local time, the center of Typhoon Vicente was located about 200 kilometers (124 miles) west of Hong Kong and is forecast to move west-northwest at about 22 kilometers (13 miles) per hour as it crosses western Guangdong into China, the Hong Kong Observatory said in a bulletin.

Hong Kong is regularly affected by tropical cyclones, but officials warned today’s storm was more severe than normal. It is the worst typhoon to hit the city since Typhoon York lashed Hong Kong in September 1999, killing two people and injuring more than 500 others. The storm also caused significant damage.