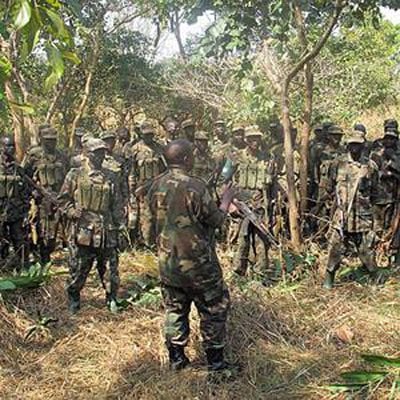 PHUKET (News Wires): The United Nations (UN) yesterday said it will meet in Uganda with government officials from central Africa next week to establish a comprehensive regional strategy to combat the Lord’s Resistance Army (LRA), which came under worldwide media attention this month as a result of a YouTube documentary.

The meeting is scheduled to take place on Thursday and Friday next week in the Ugandan city of Entebbe. The meeting follows a previous one in January in the capital of the Democratic Republic of Congo (DRC), Kinshasa, when African countries affected by the LRA agreed to toughen measures against the group.

Led by Joseph Kony, rebel group LRA gained notoriety for its atrocities in Uganda, many of them in the country’s North in the 1990s. But in recent years, the group has extended its violence and operations to neighboring countries after a sustained military effort drove them from parts of Uganda in 2004. Remnants of the insurgency continue to attack civilians in South Sudan, the Central African Republic and DRC.

The group is notorious for carrying out massacres in villages, mutilating their victims, abducting boys for use as child soldiers, and forcing girls into sexual slavery.

In Libreville, Gabon, UN Special Representative of the Secretary-General and head of the UN Office for Central Africa (UNOCA) Abou Moussa spoke during a press conference, explaining that the meeting in Entebbe will also be in pursuance of the mandate given to UNOCA by the UN Security Council last year.

The mandate was issued to develop, in cooperation with UN missions and the African Union, a regional strategy for international humanitarian and development assistance, as well as peacebuilding in areas affected by the LRA violence.

“After the meeting in Entebbe, one of the milestones of our commitment will be the presentation to the Security Council of the Secretary-General’s report on UNOCA activities, including measures taken to combat the LRA and ensure development in the affected areas,” said Moussa.

Last week, the UN High Commissioner for Refugees (UNHCR) voiced concern over the recent displacement of several thousand people as a result of fresh attacks by the LRA in DRC’s north-eastern province of Orientale.

After a lull in LRA raids in the second half of last year that resulted in improved security, new attacks on civilians have been reported in the territories of Dungu, Faradje, Watsa, Niangara, Bondo and Ango in Orientale. The fresh attacks have caused 3,000 people to flee their homes.

There have been at least 20 new attacks in Orientale since the beginning of this year, with one person killed and 17 abducted, according UNHCR.

Kony was indicted for war crimes by the International Criminal Court (ICC) in the Netherlands in 2005 but has evaded capture. Kony received a surge of attention earlier this month when campaign group ‘Invisible Children’ released a 30-minute documentary which called for an increased international effort to capture the LRA’s leader. As of Wednesday, the YouTube video has more than 78 million views.

Nigeria: Death toll in Jos church attack reaches 19
PHUKET (News Wires): A person who was injured on Sunday when a suicide car bomber targeted a Catholic church in the Nigerian city of Jos has died, raising the death toll to nineteen, officials said on Tuesday.

The attack happened on Sunday when a car bomber was stopped at the gates to the St. Finbar’s Church in the Rayfield area of the restive central Nigerian city. The explosion happened after the driver refused to open his trunk, about 10 minutes into the mass.

It was not immediately known who was behind Sunday’s attack, but the Islamic terrorist group Boko Haram has been blamed for most of the region’s terrorist attacks. It seeks the imposition of an extremist stance of the Shariah law, which is a Muslim code of conduct. The group’s name, in the local language of Hausa, roughly translates as ‘Western religion is sacrilegious’ or ‘non-Islamic religion is a sin.’

On Christmas Day, at least 40 people were killed when Boko Haram militants attacked Christians in the Nigerian cities of Madalla, Jos, Gadaka and Damaturu. Most of the victims died in Madalla, near the capital of Abuja, when a suicide bomber targeted Christians who were leaving the St Theresa’s Catholic Church after a morning service.

In response to the deadly attack, Pope Benedict XVI expressed his sadness about the “senseless acts” which he said left Nigerian lands “drenched with innocent blood.” He also expressed his closeness to the Christian community in Nigeria, which was also hit by a series of bomb blasts on Christmas Eve 2010, killing 80 people.