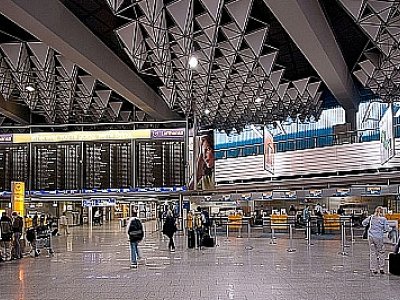 PHUKET (News Wires): More than 400 flights have been canceled at Frankfurt Airport in Germany after ground controllers launched a two-day strike over a wage dispute yesterday, aviation officials said today.

Only 16 of the 200 ground controllers reported for work on Thursday after the German union for air traffic workers (GdF) announced a seven-hour strike between 3pm and 10 pm local time. As a result, at least 150 flights were canceled on Thursday at Europe’s third-biggest airport.

But GdF announced it would strike again on Friday between 8am and 10pm. local time, threatening 1,082 scheduled flights. As of 6am this morning, 257 scheduled flights for Friday had already been canceled, and airport officials expect that number to increase throughout the day as airlines are forced to scrap flights.

The strike comes after the air traffic control labor union failed to reach a wage agreement with airport operator Fraport. The company says the union’s demands are too high, and rival labor groups at the airport have voiced anger at GdF, portraying it as greedy.

“The union remains completely intransigent and irresponsible in its demands for high, double-digit pay increases and other adjustments for working hours and special benefits ranging between 50 and 70 per cent,” said Herbert Mai, Fraport’s executive board member for labor relations.

Mai accused GdF of intentionally spreading incorrect information and being unwilling to find a compromise solution. “Indeed, Fraport has largely accepted GdF’s demands as far as Apron Control employees are concerned,” he said. “Regarding the other staff groups in the traffic operations center and involved in supervision activities on the airport ramp, the union’s demands are extremely high in relation to comparable activities in other areas – and thus cannot be implemented.”

But the Fraport official said it remains committed to resume talks with GdF. “We regret that GdF’s rigid position has been taken at the expense of the passengers, airlines and employees,” he said. “We remain committed to our offer and to resuming talks, as long as GdF is willing to engage in realistic negotiations.”

Whilst there are no direct flights from Frankfurt to Phuket a number of airlines, such as Qatar Airways and Air Berlin, fly direct to Bangkok (click here for more information).

PHUKET (News Wires): A Czech Airlines passenger plane made an emergency landing in Prague on Wednesday after the captain collapsed and died during a flight from Poland, the airline said. The cause of death was not immediately known.

Czech Airlines flight 777, which is also marketed as Korean Air flight 7664, was on a regular route from Warsaw to Prague when the captain suddenly collapsed. “[The aircraft] had to be assisted by an ambulance service because of indisposition of a member of cockpit crew,” said Hana Hejsková, a spokeswoman for Czech Airlines. “Rescue of the captain’s life unfortunately failed.”

The plane, an ATR 42 aircraft, was carrying 46 passengers when it landed at Prague Ruzyne International Airport at approximately 12:02 p.m. local time. “Safety of the passengers wasn’t threatened. The flight was fully under control of the second pilot and landed smoothly without any problems,” the spokeswoman said.

Hejsková provided few details about the incident, but said the cause of death is still being investigated. “It is an untold tragedy, we all feel deep sorrow and express condolences to the captain’s relatives,” she said. “All Czech Airlines pilots are repeatedly trained also for this kind of non-standard situation. We are expressing big thanks to all crew from [the] OK 777 flight for [the] very professional and above-standard managing of this situation.”

Czech Airlines, the national airline of the Czech Republic, said it would not release the identity of the captain.

PHUKET (News Wires): Three people were killed on early Wednesday morning when a small plane crashed into a hill in the central-western region of Washington, local and federal officials said. There were no survivors.

The accident happened between 1:30am and 2am local time when the single-engine Cessna 172 aircraft crashed on the sheer face of Little Si, a hill near the town of North Bend in King County which is named after its taller neighbor, Mount Si. There were three people on board.

Residents and deputies in the region reported hearing an explosion at the time of the accident, but it took search-and-rescue teams several hours to locate the wreckage. King County Sheriff’s Office spokeswoman Cindi West said its helicopter was receiving an emergency locator transmission but experienced difficulty pinpointing the location.

West said the bodies of three people, two men and one woman, were recovered at the scene of the accident. It was not immediately clear if the emergency locator transmission was automatically activated upon impact or if it was activated by someone who initially survived the crash.

Both the FAA and the National Transportation Safety Board (NTSB) are investigating the cause of the accident.