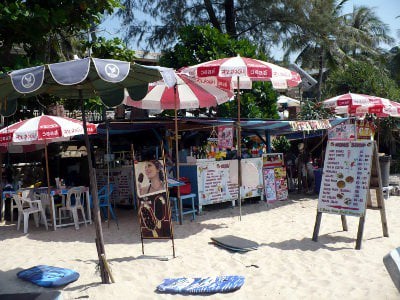 PHUKET: The battle to keep Phuket’s beaches free of illegal vendors continues to be a pitched one, with each small advance seemingly followed by a setback.

In the latest development, four local residents have set up small restaurants on the sands of Kata Beach with low-to-the-ground Japanese-style dining tables selling grilled and barbecued meats every evening starting at dusk.

Orders by Karon Municipality for the vendors to vacate the site have gone unheeded, the vendors arguing that as local residents they have the right to make a living on the beach.

A different group of local residents complained about the restaurants to the Damrongtham Center at Phuket Provincial Hall, which serves as the Phuket ombudsman’s office.

Municipal workers ordered the operators to leave, but they stayed put and continued to cite their right to make a living. At last report Damrongtham Center officials were trying to find a solution to the problem.

Karon Municipality is responsible for administration at three beaches: the three-kilometer Karon Beach as well as Kata and Kata Noi beaches, both one-kilometer long.

It uses a tripartite committee comprising municipal officers, the business owners and their staff in order to maintain order and cleanliness at the beach and resolve disputes between operators. Three different kinds of businesses fall under the committee’s administration: beach chair and umbrella rental; massage; and vending operations.

A total of 20 such businesses are registered with the municipality.

The system worked well in the past when only local people were involved and everyone followed the rules, Karon Mayor Tawee said.

Current problems at the beaches stem largely from an influx of people not native to Phuket, including people who have relocated from Pattaya as well as foreigners, including a group of about 10 Cambodians, he said.

These vendors roam the beaches, annoying foreign tourists with offers to buy items such as sunglasses that they source at just 50 baht a pair and sell for 1,000 baht or more, Mayor Tawee added.

Efforts to fine violators have done little to stop the practice because the maximum fine the municipality can issue in such cases is just 2,000 baht, he said.

In cases involving foreigners, the relevant police agencies would be called in, Mayor Tawee warned.