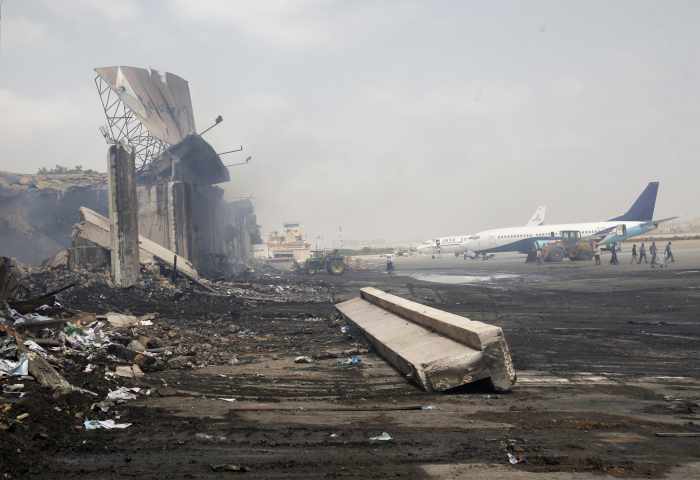 PHUKET: Pakistani fighter jets resumed air strikes in North Waziristan on Monday, a day after the army announced the start of a major military operation to flush insurgents out of the volatile region bordering Afghanistan.

Independent confirmation or other details were not immediately available in a region where journalists are not allowed to operate freely.

The army has imposed an all-day curfew and turned off mobile phone services to undermine the insurgency and restrict people’s movements, leading to food shortages in some places.

Expecting an escalation of violence, two-thirds of families have fled from the ethnic Pashtun region, residents said, many heading for neighbouring Afghanistan, where they have relatives.

“We have packed up everything and are ready to leave as soon as the curfew is lifted,” said Ethasham Khan, a resident of the regional capital of Miranshah, its usually bustling streets empty of people and traffic.

The curfew will be relaxed in the next couple of days to allow residents to leave the area, a security official said.

On Sunday, Pakistan sent troops, artillery and helicopter gunships to North Waziristan in a long-expected military operation seen as a response to a deadly insurgent attack on its biggest airport a week ago.

For now, ground troops – now numbering some 80,000 in North Waziristan, according to military sources – have not been involved in direct military action, leaving F-16 combat jets to conduct air strikes.

It was also unclear how long officials expect the operation to last in a region of forbidding mountainous terrain that has historically never been subdued by any government.

In a telling detail, the operation is called Zarb-e-Azb in Urdu, or “Strike of the Prophet’s Sword”.

The all-night attack on Karachi airport by a band of highly trained Uzbek fighters all but destroyed prospects for peace talks with the Taliban militants, who are fighting to topple the government and impose a strict Sharia-based theocracy in the nuclear-armed nation.

Prime Minister Nawaz Sharif, who preferred peace talks, has been under pressure from army hawks as well as the United States to launch a major operation, and the announcement of a full-on offensive once again means the army gained the upper hand.

Sharif, who has not publicly commented on the operation, was due to address parliament later on Monday.

After the Karachi attack, public opinion also appears to have swung in favour of a military operation, even if military action in North Waziristan means a higher risk of revenge attacks by the Taliban outside the tribal region.

“Operation at last!” The Nation daily said in a front-page headline.

Security is visibly tighter in the capital, Islamabad, as well, with street patrols by paramilitary Rangers and police. In Lahore, the cultural capital, police have added checkpoints.

Islamabad’s central Kohsar market, a shopping and dining spot for foreigners and rich Pakistanis, was all but deserted as the operation got underway on Sunday afternoon.

The Taliban and ethnic Uzbek fighters holed up in North Waziristan – home to some of Pakistan’s most feared militants and al Qaeda commanders – have both claimed responsibility for the June 8 commando-style attack on Karachi airport.

The Pakistani Taliban are allied with Afghan insurgents of the same name but operate as a separate entity, uniting dozens of smaller Jihadist groups based in the tribal areas.