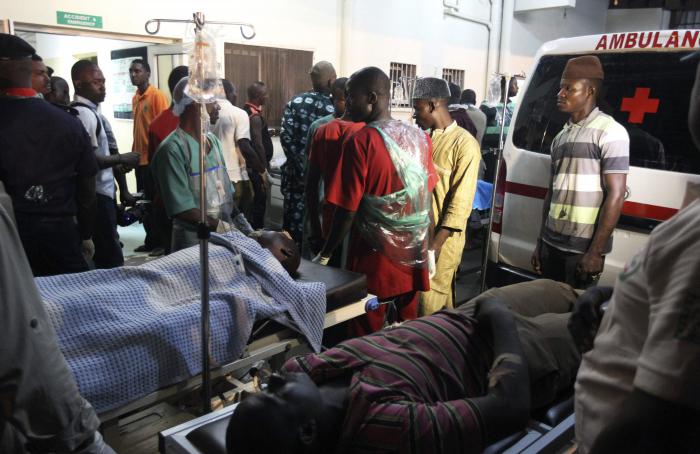 PHUKET: A suspected car bomb exploded on the outskirts of Nigeria’s capital Abuja on Thursday, killing at least 15 people a week before the city was to host a conference of leaders and business executives focussed on Africa’s growth prospects, witnesses said.

The explosion hit the suburb of Nyanya, close to the site of a morning rush hour bomb attack at a bus station last month that killed at least 75 people. The April 14 attack was claimed by the radical Islamist movement Boko Haram which is waging an insurgency against President Goodluck Jonathan’s government.

Flames lit up the area around the blast, which was strewn with drying blood and contorted bodies, and sirens wailed.

“There was a loud blast then a ball of fire,” witness Lateef Adebayo told Reuters by telephone from Nyanya. “There were many dead bodies and ambulances were rushing there.”

Kayode Adeyemi said he counted at least 15 bodies at the scene of the blast, which shook the ground next to him.

“It exploded just as commuters were waiting to board buses,” he said. “I was about 100 metres away.”

National Emergency Management Agency spokesman Manzo Ezekiel said at least 9 dead and 11 critically wounded were taken to hospital. Other wounded victims were being treated at the site.

A Reuters photographer in a nearby hospital saw 11 charred bodies that medical staff said had been brought there from the place of the blast. Another witness to Thursday’s blast, Joe Udofia, said there was a “deafening explosion, then the area near Nyanya bridge was on fire. There were many people in the vicinity.”

There was no immediate claim of responsibility. Boko Haram, which is seeking to carve out an Islamist enclave in Africa’s No. 1 oil producer, had threatened further attacks after the April 14 bombing.

The latest attack is an embarrassment for Jonathan’s government, which had announced a massive security operation to protect the World Economic Forum on Africa scheduled for May 7-9 in Abuja. The forum, a regional replica of the Davos, Switzerland event, brings together international leaders, policy makers, entrepreneurs and philanthropists.?

Nigeria’s government had announced that 6,000 soldiers and police would be deployed to protect next week’s summit which is due to be attended by Chinese Premier Li Keqiang, African leaders and a host of other international personalities.

The government and the military have been under intense pressure to step up security in the country following the April 14 attack and the mass abduction by suspected Boko Haram militants the same day of more than 200 teenage schoolgirls from a northeastern school. Some of the girls escaped but most are still missing.

This abduction has shocked Nigeria, triggering protests in Abuja and exposing the security forces’ inability to contain a ruthless anti-government insurgency whose targets also include Christian churches and civilians of all races and creeds.

The West African oil producer, which recently replaced South Africa as the continent’s biggest economy through a rebasing of its GDP, faces an election 10 months away which many fear will exacerbate existing political, ethnic and religious tensions.