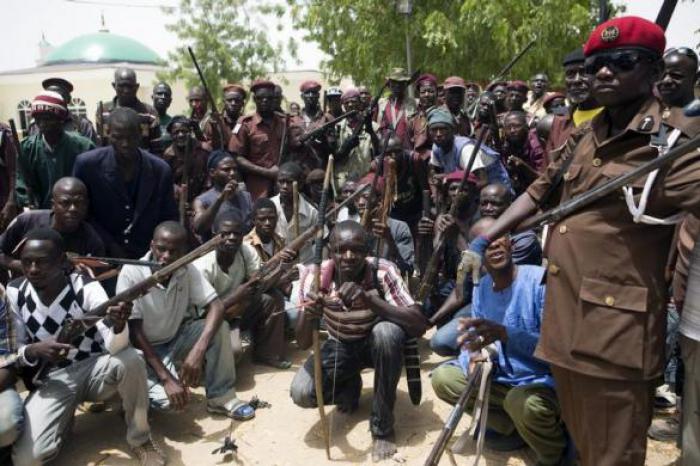 Separately, police said men on motorbikes had killed nine people in a raid on the nearby village of Shawa on Monday.

There was no immediate claim of responsibility for either assault, but Boko Haram has either claimed or been blamed for scores of similar attacks in that part of Borno state, near the hilly border with Cameroon.

In the past two months, the group has redoubled its five-year-old violent campaign to carve an Islamic state out of religiously-mixed Nigeria.

Bomb attacks are growing more frequent and sophisticated, including two on the capital last month, and massacres of helpless villagers are an almost daily occurrence.

The Jos attack, if it was Boko Haram, showed how the group was spreading outwards from the northeast. Though it was not the first attack in Jos, it was by far the deadliest.

And the kidnapping of the schoolgirls highlighted just how powerless the security forces of Africa’s biggest economy and leading oil producer are to protect civilians from Boko Haram.

Two bombs on the outskirts of the capital, Abuja, last month killed 90 people between them, and on Sunday five people died in an attack in the north’s main city, Kano.

President Goodluck Jonathan, who has been criticised for his administration’s slow response to the schoolgirl hostage crisis, announced new measures to tackle the insurgents on Tuesday.

These included a multinational force around Lake Chad, comprising a battalion each from Chad, Niger, Cameroon and Nigeria.

But security sources say the army is ill equipped and sometimes poorly trained, while the insurrection it faces is well armed, and inspired by Islamist ideology.

“Currently, budgetary allocation for the military is inadequate to meet the contemporary security challenges and also cater for the welfare of the Nigerian Army,” Major General Abdullahi Muraina, the Army’s Chief of Accounts and Budget, said on Wednesday.

Nigeria allocates nearly a third of its federal budget, around 1 trillion naira ($6.16 billion), to security. But much is soaked up by salaries and allowances. Corruption also diverts funds away from the front line, security experts say.

Residents of Jos were still in shock after the worst bombing to strike their city.

Police and emergency services visited the scene of the Terminus commercial area on Wednesday, a blood-flecked rubble field of levelled shops, burned out cars and destroyed goods.

“One of the buildings collapsed. I’m certain there are more dead people under there – many,” said Uche Matthew, whose shop was obliterated in the blast.

Jos is in the heart of Nigeria’s volatile “Middle Belt”, where its largely Christian south meets the mostly Muslim north, and the city and the surrounding Plateau state are often a flashpoint for violence.

“There is tension everywhere in the town and the roads are completely deserted because people are afraid of reprisal attacks,” said Bosan Yakusak, a student at Jos University.

He said that on Tuesday night some youths in Kara Biu, a mostly Christian community, had attacked some Muslim petty traders, although he did not know if anyone had been wounded.

The last major Boko Haram attacks on Jos, three bombs targeting worshippers in church between Christmas 2011 and March 2012, killed at least five people. After the last of them, Christian youths beat 10 Muslims to death.