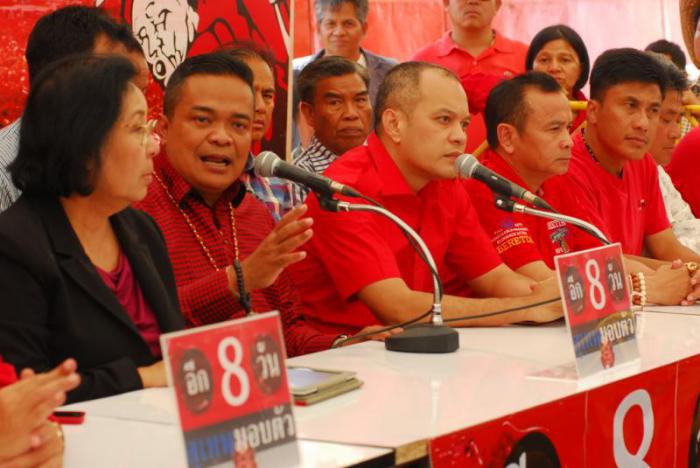 PHUKET: In his first meeting with warring parties yesterday, Army chief Prayuth Chan-ocha mapped out resolutions to pull the country out of the ongoing political crisis, though they failed to come to a conclusion.

Representatives from the government, the ruling Pheu Thai Party, the opposition Democrat Party, the pro-government United Front for Democracy against Dictatorship (UDD), the anti-government People’s Democratic Reform Committee (PDRC), the Senate and the Election Commission (EC) all presented their ideas to the Army chief.

The ideas they offered were no different from what they had previously proposed in public, which had failed to end the impasse. Democrat leader Abhisit Vejjajiva outlined the very same roadmap that he had proposed earlier, Army deputy spokesperson Winthai Suvaree said.

In the second round of meeting today, the Army chief expects to get answers from all sides on five issues: election, neutral government, reform, protest and security measures, a source close to the meeting said.

Regarding holding an election, Prayuth wants to know how polls can be held in six to nine months.

On the issue of a neutral government, he wants to know if it will be a caretaker government or one that has full mandate.

On reform, he wants to know precisely what reforms each side wants to see and in what form.

On protests, the Army chief wants to know if the protesters could end their rallies and return home soon, acting Senate Speaker Surachai Liengboonlertchai, who was at the meeting, said.

“The commander did not order that the protests be stopped, but said he wanted to see the protesters go home while the negotiation is going on,” he revealed.

A source said Prayuth did not want to use force to crack down on either the pro- or anti-government protesters, but wanted all sides to stop their rallies peacefully.

Prayuth also wants to put measures in place for the safety of people and economic security, the source said.

However, people may not be able to come up with answers to Prayuth’s questions overnight.

Pheu Thai Party’s executive committee member Wan Muhammad Noor Matha insisted at the meeting that his party was happy to cooperate with the military, provided it was within the Constitutional framework, which did not allow a non-elected prime minister to take office.

At the meeting, Justice Minister Chaikasem Nitisiri said people should be given the right to decide on the country’s future through an election, and the martial law enforced by the military should facilitate a smooth round of balloting.

He said national reform required time and proper lawmakers to implement them. “A fully mandated premier without an election is legally impossible,” he was quoted as saying at the meeting.

Meanwhile, UDD leader Jatuporn Promphan said as the parties present were not able to find common ground, the Army should hold a public referendum to see if the people wanted reform before election or the other way around. He suggested that the referendum be held in September and the election be scheduled for October or November.

PDRC leader Suthep Thaugsuban, however, insisted that as the country did not have a prime minister, it was the Senate’s duty to find a non-political individual for the premier’s job and implement reform before the election. He said conducting a public referendum as proposed by Jatuporn would only create new conflicts.

Prayuth told the meeting that he had enforced martial law because he did not wish to see any more bloodshed.

“I want to see every problem settled within this forum before I retire [in September]. I don’t want my juniors to take up this job. If the problem is not solved, I will not retire,” he was quoted as saying at the meeting.

PHUKET: Senators are considering the appointment of a new prime minister with full authority to run the country, in a bid to find a way out of the political impasse, sources in the upper House said yesterday.

The appointment would be made with reference to the Constitution and the Senate would give reasons explaining the need for its actions, according to the sources.

However, there are some legal problems and obstacles, as the caretaker government has not sought an extraordinary session for the Senate to discuss the matter, the sources said.

The senatorial working group responsible for this matter has assigned acting Senate Speaker Surachai Liengboonlertchai to find a solution to the legal problems.

Surachai yesterday said, “I have done homework on the problematic issue. But I will not talk about this in detail. This is a sensitive matter.”

At their meeting on Tuesday, some senators expressed hope that following imposition of martial law, the military would help the Senate pressure the remaining Cabinet members to resign and pave the way for appointment of a new prime minister, according to the sources.

A senator even suggested soldiers should force the Cabinet members at gunpoint to resign, something that was done by coup-makers. However, this proposal was opposed by many other senators who did not want to see the military’s involvement in the appointment of a new PM.

Senator Dej-udom Krairit said he expected a Constitutional Court verdict in a case filed recently by Senator Paiboon Nititawan asking the court to rule whether the remaining Cabinet members could still remain in power.

He expected that verdict in two weeks. “But if we can’t wait, I believe Surachai has a way. He has met many people, both in secret and in the open,” he said.

Meanwhile, Pheu Thai Party’s legal expert Ruangkrai Leekitwattana said he would today petition the Constitutional Court to rule whether it is constitutional for Surachai and other senators to attempt to appoint a new prime minister to set up a new government

In a related development, the Election Commission will ask the Council of State whether the acting prime minister has the legal power to jointly schedule the next election with the EC, according to Metha Silaphan, a senior EC official. He expected the EC secretary-general to write the Council of State today about this matter.

Drop election if too dangerous: Army