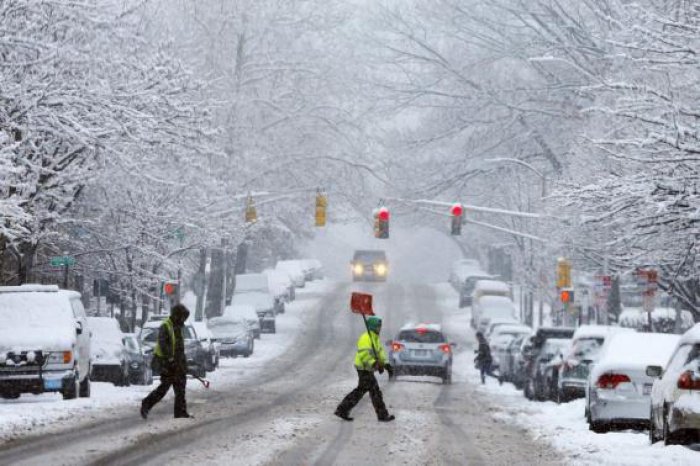 PHUKET: A swath of the US east coast from Philadelphia to New York City to Maine was bracing for a potentially historic blizzard on Monday expected to dump as much as 3 feet (90cm) of snow and snarl transportation for tens of millions of people.

The National Weather Service on Sunday issued a blizzard warning for the northern section of the East Coast from Monday afternoon until Tuesday, placing states from New Jersey to Indiana under winter storm watches and advisories. Airlines were already canceling hundreds of flights ahead of the storm.

“This could be the biggest snowstorm in the history of this city,” New York Mayor Bill de Blasio told a news conference, saying snowfall could reach up to 3 feet.

De Blasio told residents of America’s financial capital and most populous city to stay off the roads and to “prepare for something worse than we have seen before.”

The NWS called the approaching system a “crippling and potentially historic blizzard,” with many areas along the East Coast expected to see between 12 to 24 inches (30-60 cm) of snow. The New York City area could be the hardest hit, with lashing winds and snowfall of 30 inches (76 cm) or more in some suburbs.

Delta Air Lines said on Sunday it was canceling 600 flights because of the blizzard warning for the East Coast, while United Airlines will cancel all Tuesday flights at airports in New York, Boston and Philadelphia. The company will limit operations beginning on Monday night at the Newark, LaGuardia and John F. Kennedy airports in the New York area, a spokeswoman said.

Southwest Airlines said it had canceled about 20 flights. American Airlines said cancellation plans would not be finalized until Monday morning but that it expected “quite a few” flights to be affected. Flight-tracking website Flightaware.com showed 637 flights canceled for Monday as of Sunday evening.

Cities along the heavily populated East Coast had snowplows and trucks to dispense road salt on standby. Stores saw a rush of shoppers stocking up on essentials.

“People have been coming in since this morning, buying rock salt and shovels,” said Michael Harris, who works at Ace Hardware in Wading River, New York.

The Philadelphia Streets Department said on its Facebook page that crews were preparing for a “messy Monday morning commute.” The Pennsylvania Department of Transportation told travelers to postpone travel if necessary and carry emergency kits if they do go out.

The Connecticut Department of Transportation will have its entire fleet of snowplows, including 12 loader-mounted snowblowers, prepared to deploy, the governor’s office said.

ISIS deadline on Japanese captives passes with no word on fate