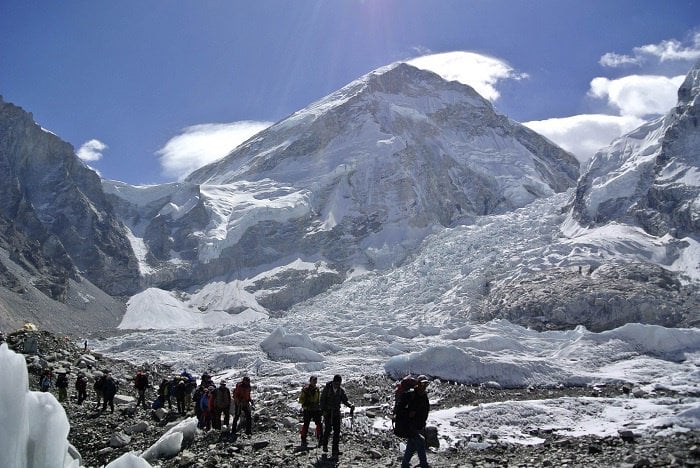 PHUKET: When Khile Sherpa opened his eyes, the snow around him was bright red, drenched with blood streaming from gashes in his body from the avalanche that catapulted him across Mount Everest’s base camp at lunchtime on Saturday.

Khile was among the first 15 survivors flown from Everest to Kathmandu on Sunday after a powerful earthquake hit Nepal a day earlier killing more than 2,460 people, at least 17 of them in the avalanche it triggered on the world’s tallest peak.

“It was a monstrous sound, like the demons had descended on the mountain,” Khile told Reuters, a bandage wrapped around his head and covering half his face.

Like hundreds of other earthquake victims, the 20-year-old was waiting for treatment outside Kathmandu’s overcrowded Medical College hospital.

The mountain guide recalled how he had just served lunch to a group of foreign climbers in the high altitude tented town when he heard the roar higher up the slope.

Seconds later, a vast cloud of ice and boulders hit and he was knocked unconscious for, he estimates, about an hour.

A team of medics found him bleeding in the snow from a head wound. They bandaged him up and took him to shelter for the night in a tent belonging to a different tour group called Seven Summit.

Khile was one of nearly 1,000 climbers and sherpa guides on Everest when the first avalanche struck and claimed the biggest toll of any disaster on the mountain.

U.S. climber Jon Kedrowski said in his blog from base camp that the earthquake broke off a “huge, jagged point” of ice from a ridge that slammed down, creating a hurricane force wind that blew people and tents up to a hundred feet.

Another climber said a large part of the camp looked like it was hit by a “nuclear blast.”

“Another one, we have an aftershock right now. Oh shit!” shouted Indian climber Arjun Vajpai, speaking to Reuters over the phone from Makalu base camp near Everest. “Avalanche!”

Screams and the roar of crashing snow could be heard over the line as he spoke.

Saturday’s disaster came a few days after the first anniversary of an Everest avalanche that killed 16 Nepali guides.

That accident, at the time the worst in Everest history, had raised questions about the risks taken by relatively low-paid local guides to help thousands of foreign climbers every year fulfill their dreams.

This time the deaths were part of a much larger catastrophe, but for some sherpa guides who make a living on Everest and other Himalayan peaks in Nepal, the dangers may now outweigh the benefits.

Pemba Nurbu Sherpa, 34, was part of an international team that included South Americans and Indians.

“We lost everything, water, equipment and tent. All I was left with was these clothes you see,” he said, pointing to his worn-out climbing jacket.

Pemba, who also suffered a head injury, said he had insisted on working on the expedition, even though last year’s tragedy made his decision unpopular with relatives. He said this, his third time on the mountain, could be his last.

“It is too risky, there was pressure from my family before not to go. But I went despite their objections.”

Not everybody is put off by danger in the peaks.

Vajpai, 22, survived the avalanches that struck his camp on Makalu, the world’s fifth highest peak some 20 km from Everest.

That has given him pause for thought, but the young mountaineer who scaled Everest when he was just 16 has not yet decided to abandon his expedition.

“We will continue if the weather allows us,” he told Reuters by telephone. “Mountaineering as a sport, you already know you might not come back. It’s a thin line.”

Like Khile, for Chinese climber Mali Yamu, 45, carrying on is not an option for now. She lay on the floor of the Medical College barely able to speak because of a rib injury.

Both were flown down from base camp for treatment in Kathmandu, but the treatment itself was precarious.

“I am OK, there is pain on my left side,” Yamu said very faintly in English. Moments later fresh tremors struck and everyone including doctors and nurses raced out of the three-storey hospital.

Still in her climbing gear, Yamu was brought out in a wheelchair and moved into a tent packed with patients and their families.