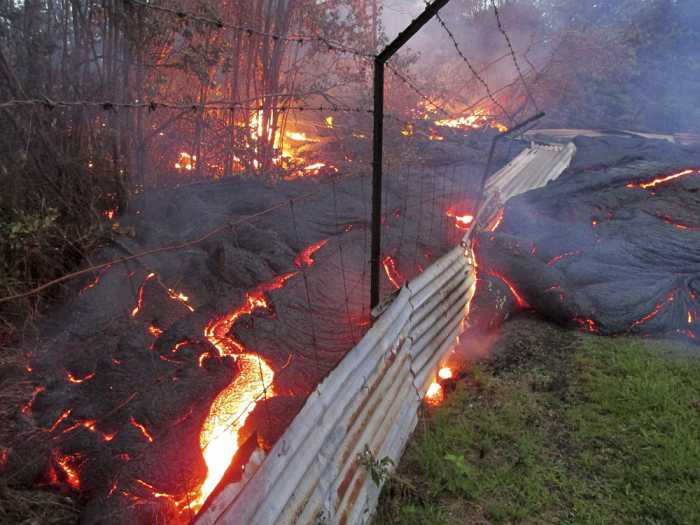 PHUKET: A slow-moving lava flow from an erupting volcano on Hawaii’s Big Island incinerated a house on Monday, marking the first home devoured by a stream of molten rock that has crept toward the village of Pahoa for weeks, civil defense officials said.

The house was abandoned some time ago, and no injuries were reported from the lava flow, which began oozing from Kilauea Volcano in late June. Hawaii Civil Defense officials said no other residential structures were immediately threatened.

The home was ignited just before noon local time by a finger of lava that broke out from the main flow on Sunday, even as the leading edge of the lava came to a near standstill 480 feet (145 meters) away from Pahoa Village Road, the main street through town, officials said.

Residents of about 50 homes that lie in the projected path of the lava have been preparing to leave the area, many of them emptying their houses of belongings in case an evacuation should become necessary.

Pahoa, a town of about 800 people, stands on the site of a former sugar cane plantation on the eastern edge of the Big Island.

Kilauea’s current eruption began in 1983, and the flow of lava that has menaced Pahoa began bubbling out of the volcano’s Pu’u O’o vent on June 27. Lava from Kilauea destroyed more than 180 homes between 1983 and 1990, but until this week none had been lost since 2012.