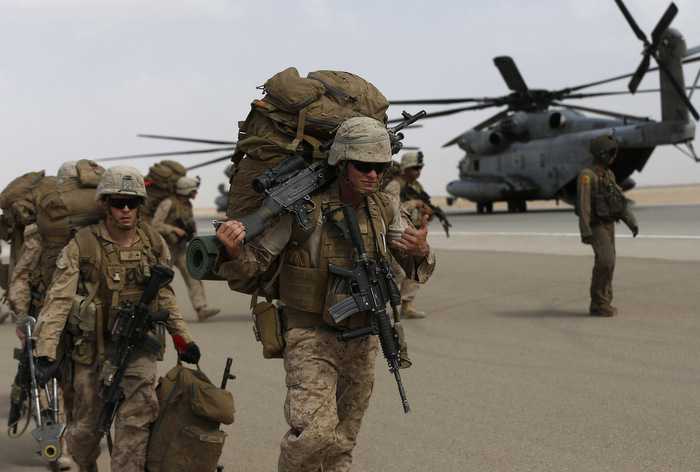 PHUKET: A fleet of planes and helicopters airlifted the last U.S. and British forces from a key base in southern Afghanistan on Monday, a day after the international coalition closed the massive facility and handed it over to the Afghan military.

The troops’ withdrawal and base closure in the province of Helmand is one of the largest operations in the winding down of the international combat mission in Afghanistan, 13 years after the toppling of the radical, Islamist Taliban regime.

Monday’s withdrawal operation passed off peacefully as part of a planned drawdown, though there was a sense of deja vu among some soldiers.

“We’re not refugees or anything, but it kind of reminding me of scenes of Vietnam, of people running to the helicopters … just this mad dash to the aircraft,” added Nguyen, who is Vietnamese-American.

The NATO-led international force is now shifting to a reduced role of support as Afghanistan’s newly trained army and police take over the fight against a resurgent Taliban.

Casualties among both civilians and Afghan security forces are near all-time highs this year, with hundreds killed and wounded each month in the conflict.

The withdrawal of the remaining U.S. and British troops from the combined base of Camp Leatherneck and Camp Bastion was carried out over 24 hours of near-continuous flights back and forth between Helmand and Kandahar Air Field, the aviation hub for southern Afghanistan.

For the Marines’ HMH 366 Hammerheads helicopter squadron, which flew on the final wave of the airlift Monday, there was a sense of pride in that the same unit also participated in the 2011 withdrawal from Iraq.

For the U.S. Marines and British forces leaving Helmand, the airlift was the first stop on the way home – all of them will be flown out of Afghanistan by the end of the year, and some within days.

“It’s been a long time away – I’m looking forward to getting back to normal life … kiss the wife and kiss the kids,” said Major Raymond Mitchell, a Marine from Rocky Mountain, North Carolina, who deployed to Afghanistan in January.

Helmand was a major focus of a 2010 troops surge to wrest control back from the Taliban. At its height, the NATO-led force had some 140,000 military personnel from nearly 50 nations.

Camp Bastion and Camp Leatherneck alone once had some 40,000 military personnel and civilian contractors as the regional headquarters for the U.S.-led international military coalition.

The Marine Expeditionary Force-Afghanistan is the last Marines unit in the country, while the British forces at Helmand were the Britain’s final combat troops.

By Jan. 1, there will be only 12,500 foreign forces in the country – 9,800 of them Americans – to advise and train the Afghan security forces that have been built up almost from scratch in recent years.

Staff Sergeant Kenneth Oswood, of Romney, West Virginia, is one of the few members of the squadron who participated in both the Iraq withdrawal and Monday’s Helmand airlift.

“It’s a lot different this time …. Closing out Iraq, when we got there, we were told there hadn’t been a shot fired in anger at us in years. And then you come here and they are still shooting at us,” Oswood said.

“It’s almost like it’s not over here, and we’re just kind of handing it over to someone else to fight.”