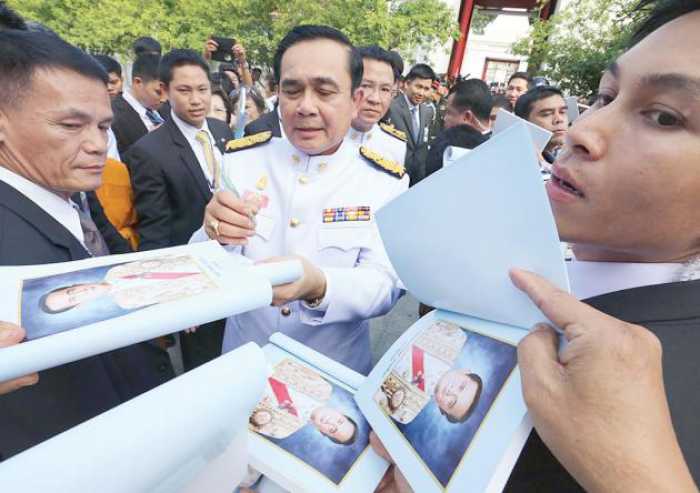 Announcing the establishment of the institute on Sunday, TRI chairman Sangsidh Piriyarangsan said he was concerned the government and the National Council for Peace and Order (NCPO) could see the TRI as a threat and perceive it as undermining the administration’s stability.

He urged them not to consider the TRI’s reform movement as presenting different reform ideologies than those of the government-run National Reform Council (NRC), or seeing it as an anti-government movement.

Prayuth questioned TRI’s objectives of working in parallel with the NRC to consider reform ideas and checking the government’s implementation of reform. The PM said there must be only one reform council. He said he would have his deputy in charge of legal affairs check if it was legal for the TRI to organise a parallel reform stage with the NRC.

“We have the law in force. I do not know if it is legal to set up ‘a mirror council’. I do not wish to see more conflict in the country,’ he said.

The TRI chairman said the institute would act as a mirror to reflect public opinion on certain reform issues and present the proposals to the NRC.

Prayuth, however, said he welcomed reform ideas from any sector but they must be submitted via Damrongtham centres, the Secretariat of the House of Representatives, or the Internal Security Operations Command (ISOC).

“These are legal channels. If the TRI wants to present reform proposals, it must submit them to these channels only,’ the PM said.

The group has envisioned a grand idea of developing the country under “dhammocracy” or democracy based on Buddhist philosophies and principles and strengthening citizen politics and political innovation.

The TRI claimed the NRC might adopt reform ideas mainly presented by bureaucrats. The institute would like to present the NRC with well-rounded information or proposals from people around the country and civic groups.

“I have no problem heeding proposals from people across the country. But the problem is can we arrive at a conclusion? If we dissent from the start, we cannot solve any problem,” the PM said.

Prayuth said his government could not complete a comprehensive reform on 11 fronts within one year, saying what it could do was to establish a short-term objective to achieve in one year. The next government would have to continue the reform mechanism established by his government.

Meanwhile, Thaworn Senneam, a leader of the People’s Democratic Reform Committee said the PDRC would join the ISOC’s public hearing on reform from November to March.

Thaworn urged the NRC to heed reform ideas from various sectors of society. “The government must admit that 250 members of the NRC do not know everything. So the council must ensure that they accept different opinions to achieve our ultimate goals of reform,’ he said.