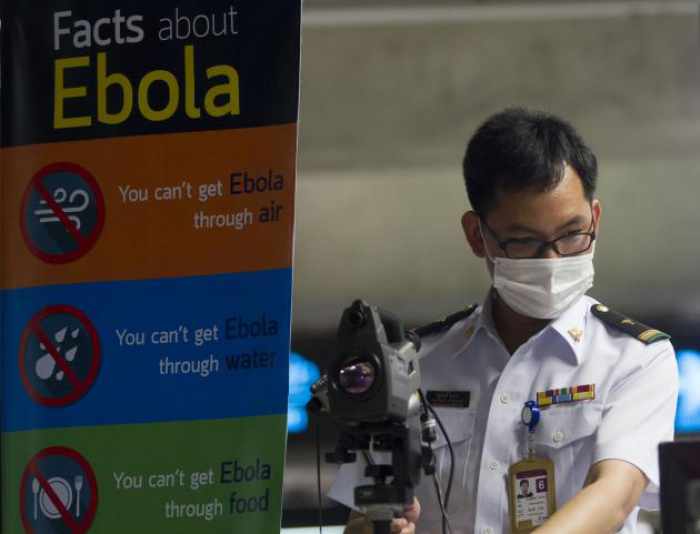 PHUKET: Laboratory tests have cleared any concern that a woman travelling from Ebola-hit Guinea may have developed the deadly infection. The 24-year-old woman had been under quarantine for a day pending test results.

Dr Narong Sahamethapat, Public Health Ministry’s permanent secretary, said yesterday that results from both Chulalongkorn University’s Faculty of Medicine and Department of Medical Sciences showed that the woman had tested negative to the Ebola virus.

The woman arrived from Guinea on August 20 and nine days later consulted doctors after her body temperature rose to 38.8 degrees Celsius, and she developed a runny nose, sore throat and began vomiting. She was admitted to a provincial hospital on Monday. She had no fever when she passed through Suvarnabhumi Airport, Narong said.

“She was the first suspected Ebola case in Thailand,” he pointed out. The hospital took her blood samples for testing and the results came out yesterday.

“Her fever has already subsided. Doctors are checking her pulse and temperature every four hours. A second blood test will be conducted on Thurs-day to confirm the result,” Narong said.

He stressed that the woman had not been confirmed as being infected with Ebola. She merely was presented with a fever after visiting a country that has been hard hit by the Ebola outbreak.

The doctor said 16 others, both Thai and foreign, who have been in close contact with the patient are also being closely monitored.

“If they show signs of possible infection, they will be taken to the isolation ward in the hospital until the 21-day incubation period passes,” he said.

He also provided assurances that personnel taking care of the woman were wearing high-grade protection gear and appliances were being strictly sterilised.

Dr Sophon Mekthon, director-general of the Disease Control Department, said the woman was categorised as being on the first tier of procedures for preventing Ebola, as she had fever after returning from an affected area.

Chookiat Ophaswongse, honorary president of the Thai Rice Exporters Association, said some Thai rice exporters had faced problems in shipping rice to West Africa as some international freighters and charters refused to go to ports of countries hit by the Ebola outbreak. Their crews were highly concerned about being infected by the disease.

As a result, some rice stocks had backed up in Thai warehouses, causing problems for exporters. Delays also caused local prices of rice to drop to only Bt7,800-Bt8,000 a tonne this week.

Africa is a major market for Thai rice. Normally, Thailand exports about 45 million tonnes to Africa, mostly to Benin and Nigeria.

Vichai Sriprasert, president of Riceland International, one of Thailand’s leading exporters of parboiled rice, said a shortage of labour and the Ebola outbreak had caused problems for Thai rice exporters. He said most shippers refused to carry rice to West Africa. Some companies that had agreed to do so had asked for higher payments.

The International Trade Promotion Department of the Commerce Ministry is closely monitoring the situation in West Africa, and the Thai Trade Office in Nigeria is estimating the situation daily. So far, shipments to Nigeria have not been affected by the Ebola outbreak.

Exports to Africa dropped by 1.5 per cent in July to US$765 million. Shipments to the region rose slightly, by 0.9 per cent, to $4.82 billion in the first seven months year on year.

Northern floods recede, but more on the way