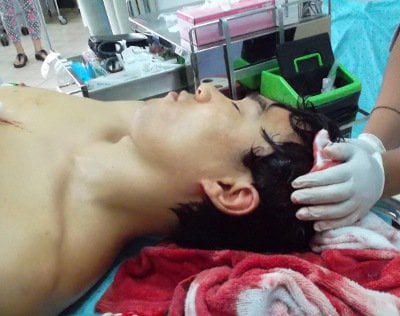 PHUKET: A Korean tourist who was struck in the head by a longtail boat propeller while on a snorkeling trip off Koh Panyee is conscious and eating unassisted, staff at Phuket International Hospital told the Phuket Gazette this morning.

Kang Chulgue, 30, was on a day trip with five other Korean tourists at the popular tourist site Tumlod-Khao Phing Kan, located near Koh Panyee in Phang Nga Bay, when the accident happened.

“He is awake and talking and eating by himself. We still have a tube connected to make sure that blood is drained from his head,” a hospital staffer told the Gazette.

Rescue van driver Chaiyuth Rassamee told the Gazette that Mr Kang fell unconscious while en route to the hospital due to blood loss.

“All I could do was give him first aid to stop the bleeding and get him and his five friends to hospital as soon as I could,” he added.

Tourists in the van told Mr Chaiyuth that Mr Kang was snorkeling somewhere off Koh Panyee. After about 20 minutes in the water a longtail boat passed through where they were snorkeling.

“After realizing that Mr Kang had been struck in the head, they rushed him by boat back to the Baan Krasom Pier in Takua Thung, in Phang Nga, where he was put in a tour van and rushed to Phuket,” Mr Chaiyuth explained.

“Mr Kang was bleeding a lot and there was a lot of traffic because it was rush hour, so when they saw our rescue van, they stopped and asked for help,” he added.