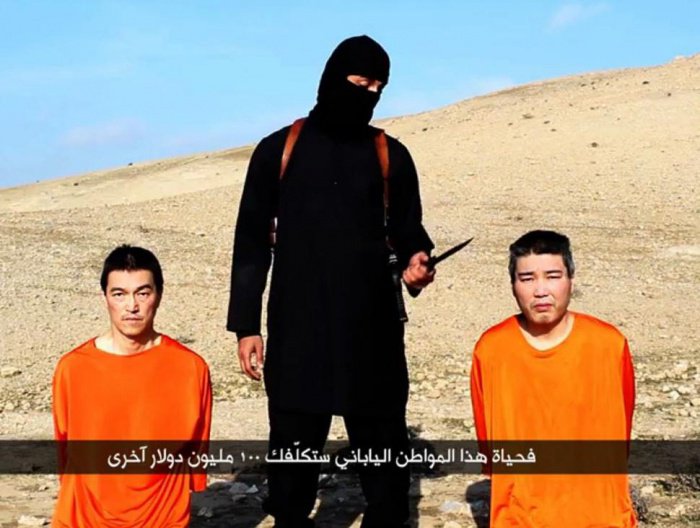 PHUKET: Japan said on Friday it was still trying to secure the release of two Japanese hostages held by Islamic State militants after a deadline to pay ransom for their release passed and there was no immediate word on their fate.

Prime Minister Shinzo Abe’s government considered whether planned legislative changes would give it the legal basis for a military strike on the Islamic State militants and concluded it did not, according to a briefing document reviewed by Reuters.

The capture of two Japanese citizens in Syria represents an “unacceptable act of terror,” the document said.

But it concluded the situation would not meet the legal conditions for the dispatch of Japanese forces, whose activities abroad are constrained by the pacifist, post-war constitution, even under planned changes to the current interpretation of the charter.

In an online video released on Tuesday, a black-clad figure holding a knife stood between journalist Kenji Goto and Haruna Yukawa, threatening to kill them if Tokyo did not pay Islamic State $200 million within 72 hours.

Abe has said saving the men’s lives is paramount but that Japan will not bow to terrorism. Japanese officials have declined to say if they would pay any ransom, a move that would put Tokyo at odds with close ally the United States.

“Despite the fact that the situation is severe, we are continuing to seek cooperation from all countries, tribal leaders and religious representatives who might have contacts with an aim to secure the early release of the two Japanese,” chief government spokesman Yoshihide Suga told reporters.

Goto’s mother pleaded for his release just hours before the deadline passed.

“My son Kenji is not an enemy of the people of the Islamic faith. I can only pray as a mother for his release,” Junko Ishido told a packed news conference, choking back tears. “If I could offer my life I would plead that my son be released, it would be a small sacrifice on my part.

“He only went to rescue his friend. He has always looked out for weaker people, he was always helping weaker children than him,” she added.

Abe has ordered his government to make every effort to secure their safe release, setting off a flurry of activity among Japanese diplomats.

However, sources familiar with the matter said Japanese diplomats had told the families of the two captives prior to the video’s release that no ransom would be paid.

The captor in the video, which resembles those showing previous Islamic State captives, said the ransom demand matched the $200 million in aid that Abe pledged to help countries fighting Islamist militants.

The government hardened its official stance after the 1996 hostage taking at the Japanese ambassador’s residence in Peru, when it refused to pay ransom.

Abe made the pledge during a multi-nation visit to the Middle East earlier this month. Islamic State militants have seized large areas of Iraq and Syria, and beheaded several Western captives.

Japan has stressed that its donation is for humanitarian aid, such as helping refugees, and insisted that it will not bow to terrorist threats.

In an address at Friday prayers at Tokyo’s most prominent mosque, the Tokyo Camii and Turkish Culture Center, the imam, Muhammad Rashid Alas, called for the “immediate release of the two Japanese hostages,” quoting from the Quran on the need to show mercy.

The centre had earlier posted a statement saying Islamic State’s actions are “totally against Islam and have a serious impact on Muslim communities all over the world and put Muslims in a precarious position”.

Abe’s handling of the hostage crisis – he must appear firm but not callous – will be a big test for the 60-year-old, but he appears to have few options.

Few Japanese are likely to blame Abe if the two captives are killed, but there could be questions raised over why he singled out countries battling Islamic State for the aid when it was known the group was holding two Japanese nationals.

“Just when they held hostages and considered what they should do about them, Mr. Abe offered something that would, in their (IS’s) logic, raise the hurdle (for resolving the situation),” said Motohiro Ono, an opposition Democratic Party of Japan lawmaker who is a Middle East expert.

Yukawa, aged around 42 and who dreamed of becoming a military contractor, was captured in August outside the Syrian city of Aleppo. Goto, 47, a war correspondent with experience in Middle East hot spots, went to Syria in late October to try to help Yukawa.

New York braces for ‘biggest blizzard in its history’