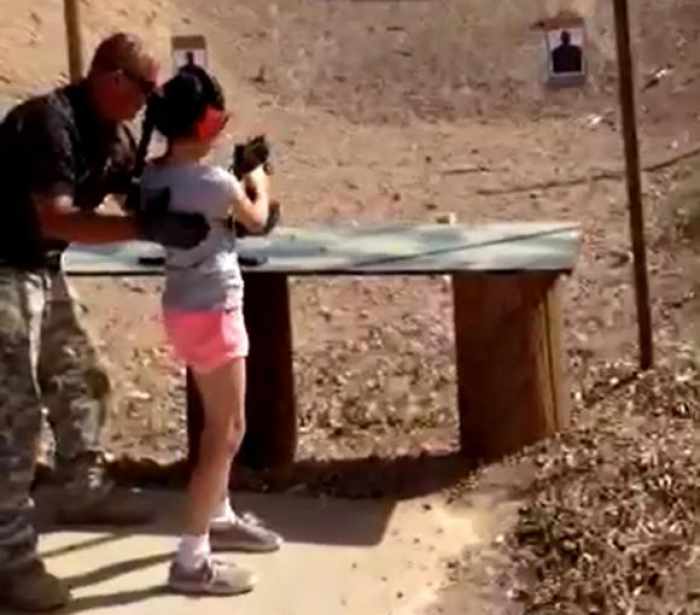 PHUKET: County law enforcement officials in Arizona said on Thursday no criminal charges are pending after a probe into a gun range incident in which a 9-year-old girl fatally shot her instructor with an Uzi, adding it was “being viewed as an industrial accident.”

But state occupational health and safety officials were conducting their own probe of the Monday morning incident that was captured on video at a gun range that caters in part to tourists visiting nearby Las Vegas.

The shooting at the Arizona Last Stop in White Hills, near the Nevada border, has touched off debate over shooting ranges offering machine guns to casual visitors and the wisdom of giving children access to high-powered firearms.

“Based on the video, the Sheriff’s Office has determined no charges are pending,” the Mohave County Sheriff’s Office said in a statement, adding that the shooting was “being viewed as an industrial accident.”

A video clip released by the sheriff’s office of the moments just before the fatal shooting and circulating on the Internet shows Charles Vacca giving a girl in pink shorts and a braided ponytail hands-on instruction as she aims the Uzi at a black and white target shaped like the silhouette of a man.

Vacca is heard encouraging the girl and asking her to squeeze off one shot. Then he tells her, “All right, full auto” and the weapon unleashes multiple rounds as the video cuts off.

It was apparently moments later that Vacca was shot in the head when the girl lost control of the submachine gun.

Vacca, 39, had been standing next to the girl when the recoil forced her arm over her head, the sheriff’s office said. Authorities have not said how many times Vacca was hit but NBC News reported he was killed by a single bullet to the head.

A spokeswoman for the Arizona Division of Occupational Safety and Health confirmed that the agency was investigating the incident, but said state law prevented her from disclosing details.

‘WHERE CAN I SHOOT A MACHINE GUN?’

Some Uzi models are capable of firing up to 1,700 rounds per minute, or almost 30 rounds per second, according to the manufacturer’s website.

The Last Stop, a tourist hub that also includes a restaurant, bar, RV park and general store and is decorated with paintings of firearms, faux bullet holes and crosshairs and a mural depicting a gun-toting Sylvester Stallone in the film “Rambo.”

An employee at the scene said the range had resumed operations but gave no further comment, and gunfire could be heard coming from inside. The Arizona Republic had earlier reported the range was closed following the incident.

Owners of the gun range could not be reached for comment by Reuters on Thursday.

The girl, whom police did not identify, was at the outdoor range with her parents while visiting Nevada from New Jersey.

Arizona Last Stop has a “Burgers and Bullets” program that offers customers lunch with a trip to the range, where they can choose from among more than 20 automatic weapons to shoot, according to its website.

The website shows the packages available for the shooting range, which is described as having a “unique ‘Desert Storm’ atmosphere,” and says each group gets a “certified ex-military firearms instructor.” It lists the minimum age as 8.

Scott Edwards, a former Las Vegas bus driver visiting the Last Stop on Thursday, said such gun ranges were popular with tourists visiting from out of state.

“One of biggest questions I got from all over the world is where can I shoot a machine gun?” Edwards said.

Bob Irwin, who owns the Gun Store in Las Vegas, which he said was the oldest range offering machine guns in the city, said his facility had no age restrictions, instead using strength and weight as a metric.

Irwin said Gun Store instructors were trained to hold the firearm for the child, who just pulled the trigger.

“There’s no way a child that small is going to handle the vibration and motion of that gun,” Irwin said.