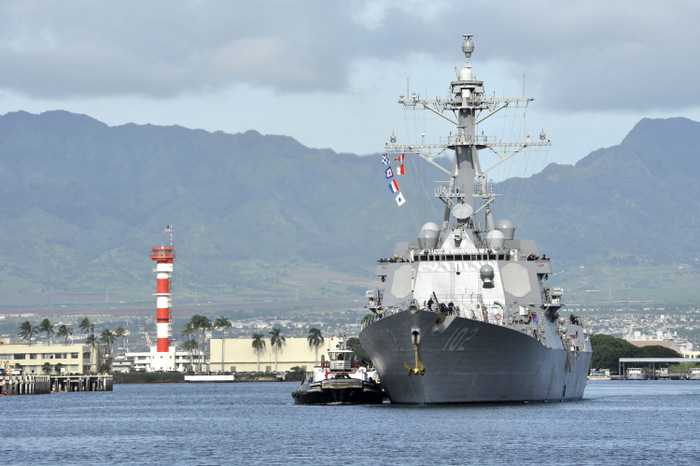 PHUKET: Divers and ships will search for the wreckage and the all important black boxes of a doomed AirAsia plane on Wednesday after Indonesian rescuers found several bodies and debris floating in shallow waters off the coast of Borneo.

Aviation experts believe the fuselage may be easily found as the aircraft probably only broke up when it hit the water.

“The fact that the debris appears fairly contained suggests the aircraft broke up when it hit the water, rather than in the air,” Neil Hansford, a former pilot and chairman of consultancy firm Strategic Aviation Solutions, said on Wednesday.

Indonesia AirAsia Flight QZ8501 lost contact with air traffic control early on Sunday during bad weather on a flight from the Indonesian city of Surabaya to Singapore.

The Airbus A320-200 was carrying 162 people, mostly Indonesians. No survivors have been found.

Indonesian President Joko Widodo said his priority was getting bodies off the bottom of the Karimata Strait in the Java Sea, where rescuers retrieved a plane door and other debris on Tuesday, so victims could be identified.

“I feel a deep loss over this disaster and pray for the families to be given fortitude and strength,” Widodo said in Surabaya on Tuesday after grim images of the scene in the Java Sea were broadcast on television.

AirAsia Chief Executive Tony Fernandes, who has described the crash as his “worst nightmare”, was rushing to Surabaya where relatives of the missing are gathered at a crisis center in Indonesia’s second-largest city.

Widodo said AirAsia would pay an immediate advance of money to the families, many of whom collapsed in grief when they saw the television pictures of debris.

Dozens of Indonesian navy divers are expected to begin the underwater search at first light on Wednesday, a source close to the investigation said.

The United States said its missile-guided destroyer USS Sampson and combat ship USS Fort Worth were awaiting instructions from the Indonesian search command on the recovery operation. Singapore said it was sending two underwater beacon detectors to try to pick up pings from the black boxes, which contain cockpit voice and flight data recorders.

About 30 ships and 21 aircraft from Indonesia, Australia, Malaysia, Singapore, South Korea and the United States have been involved in the search.

The plane, which did not issue a distress signal, disappeared after its pilot failed to get permission to fly higher to avoid bad weather because of heavy air traffic.

It was travelling at 32,000 feet (9,753 metres) and had asked to fly at 38,000 feet. When air traffic controllers granted permission for a rise to 34,000 feet a few minutes later, they received no response from the aircraft.

Online discussion among pilots has centered on unconfirmed secondary radar data from Malaysia that suggested the aircraft was climbing at a speed of 353 knots, about 100 knots too slow, and that it might have stalled.

Investigators are focusing initially on whether the crew took too long to request permission to climb, or could have ascended on their own initiative earlier, said a source close to the probe, adding that poor weather could have played a part as well.

A Qantas pilot with 25 years of experience flying in the region said the discovery of the debris field relatively close to the last known radar plot of the plane pointed to an aerodynamic stall, most likely due to bad weather. One possibility is that the plane’s instruments iced up in a tropical thunderstorm, giving the pilots inaccurate readings.

The lack of a distress call indicated the pilots may have realized too late they were in trouble and were too busy struggling to control the aircraft to issue a call, the Qantas pilot said.

The Indonesian pilot, a former Air Force jet fighter pilot with 6,100 flying hours under his belt, was experienced and the plane last underwent maintenance in mid-November, said the airline, which is 49 percent owned by Malaysia-based budget carrier AirAsia.

Three airline disasters involving Malaysian-affiliated carriers in less than a year have dented confidence in the country’s aviation industry and spooked travellers across the region.

Malaysian Airlines Flight MH370 went missing in March on a trip from Kuala Lumpur to Beijing with 239 passengers and crew and has not been found. On July 17, the same airline’s Flight MH17 was shot down over Ukraine, killing all 298 people on board.

In an additional incident, an AirAsia plane from Manila overshot the runway on landing at Kalibo in the central Philippines on Tuesday. No one was hurt.