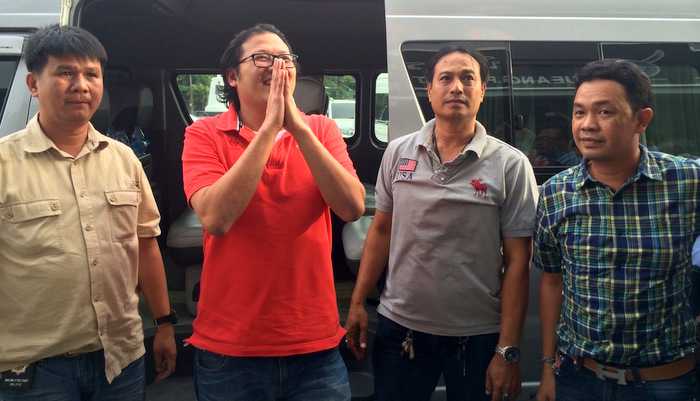 PHUKET: The Public Prosecutor has yet to press formal charges against Prab and Pattawee Keesin, both sons of former Patong Mayor Pian Keesin, for operating a mafia organization.

Pisitpol Phumsawat, chief Phuket public prosecutor, confirmed to the Phuket Gazette that his office was still reviewing evidence presented by the police

“I have dedicated a team to investigate the police claims,” said Mr Pisitpol.

“This case has received a lot of media attention, so we have to work on it carefully in order to be fair to both sides.”

No deadline has been set for the Public Prosecutor Office to decided whether or not to take the case to court, he added.

Mr Pisitpol declined to reveal any specific details about the case, but did mention that the Keesin’s lawyer had appealed for a fair investigation into any alleged wrongdoings.

All eight were taken to Phuket City Police Station and questioned until 3am, when they were released on 150,000 baht bail each (story here).

Mr Pian was found dead at his secondary home north of Phuket Town on October 7 (story here). Police quickly ruled out foul-play in the kingpin’s death.

Region 8 Police Deputy Commander Paween Pongsirin, who spearheaded the anti-mafia cleanup operation in Phuket earlier this year, gave the family one week to grieve before filing his request for the public prosecutor to pursue the mafia charges against the clan (story here).

Maj Gen Paween told the Gazette that his officers gave “more than enough evidence” against the suspects.

“I have no idea what more is needed. We worked hard to get the evidence and finally arrest them,” Gen Paween said.

“We expected the public prosecutor to formally press charges soon after Mr Pian’s funeral, but they have yet to do so.”

Regardless, Gen Paween vowed not to interfere in the prosecutors’ investigation.

“We have done our part. Now it’s the prosecutor’s turn. I cannot interfere in their work, but I am keeping a close eye on the case,” he said.