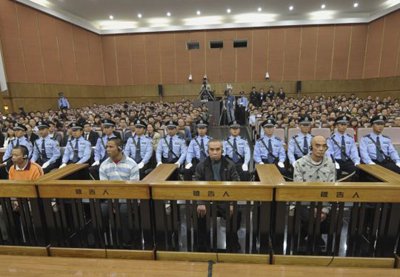 China’s official Xinhua news agency said that chief suspect Naw Kham, who was extradited to China by Lao officials in May, was guilty of the killings of Chinese boat crews last year in the “Golden Triangle” region known for drug smuggling where the borders of Laos, Myanmar and Thailand meet.

It was one of the deadliest assaults on Chinese nationals overseas in modern times and prompted Beijing to send gunboat patrols to the region downstream from its borders.

A fifth suspect was given a suspended death sentence while the sixth was jailed for eight years, Xinhua said.

Naw Kham, in his 40s, pleaded guilty at the Intermediate People’s Court of Kunming in September during a two-day trial in which he expressed penitence to the victims and their families, state media reported at the time.

The 13 Chinese sailors aboard two cargo ships were killed after being hijacked on a lawless stretch of the Mekong River last October.

A Reuters investigation in January showed that some, if not all, were still alive when their boats crossed into Thailand, and that they were executed and tossed overboard inside Thai territory.

The Mekong snakes from China into Southeast Asia, where it forms the border between Myanmar and Laos, and then Thailand and Laos. In 2001, the four countries signed an agreement to regularize shipping on the river.

All Chinese shipping on the Mekong was suspended after the murders, which sparked outrage in China. The incident was followed by Chinese patrols and strengthened security cooperation among the four countries.

The patrols have been seen as an expansion of Beijing’s growing role in regional security, extending its law enforcement down the highly strategic waterway and into Southeast Asia.