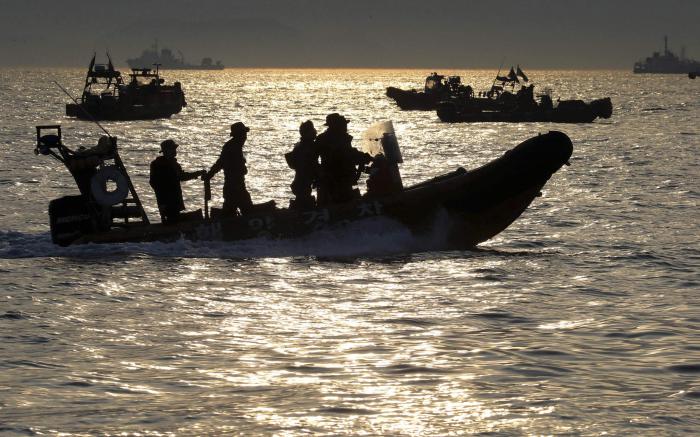 PHUKET: The body of a South Korean boy whose shaking voice first raised the alarm that a passenger ferry with hundreds on board was in trouble has been found, his parents believe, but a DNA test has yet to confirm the find, media said on Thursday.

His parents had checked his body and clothes and concluded he was their son, the Yonhap news agency said. The crew had told the children to stay put as the ferry sank.

The Sewol sank on April 16 on a routine trip from the port of Incheon, near Seoul, to the southern holiday island of Jeju. Investigations are focused on human error or a mechanical fault, with media saying the ship was three times overloaded, with cargo poorly stowed and inadequate ballast water.

Captain Lee Joon-seok, 69, and other crew members who abandoned ship have been arrested on negligence charges. Lee was also charged with undertaking an “excessive change of course without slowing down”.

Of the 476 passengers and crew on board, 339 were children and teachers on a high school outing. Only 174 people were rescued and the remainder are presumed to have drowned.

The confirmed death toll on Thursday was 159, with many of those found at the back of the ship on the fourth deck.

The first distress call from the sinking vessel was made by a boy with a shaking voice, three minutes after the vessel made its fateful last turn, a fire service officer told Reuters.

He called the emergency 119 number which put him through to the fire service, which in turn forwarded him to the coastguard two minutes later. That was followed by about 20 other calls from children on board the ship to the emergency number.

“Save us! We’re on a ship and I think it’s sinking,” Yonhap quoted the boy as saying.

The fire service official asked him to switch the phone to the captain, media said, and the boy replied: “Do you mean teacher?”

The pronunciation of the words for “captain” and “teacher” is similar in Korean.

South Korean divers swam though dark, cold waters into a sunken ferry on Wednesday, feeling for children’s bodies with their hands in a maze of cabins, corridors and upturned decks as they searched for hundreds of missing.

The divers, with oxygen and communications lines trailing, can only see a few inches in front of them in the wreckage of the ship that started sinking a week ago after a sharp turn. Most of the victims were high school children, who were told to stay where they were for their own safety.

And most of the bodies found in the last two days had broken fingers, presumably from the children frantically trying to climb the walls or floors to escape in their last moments, media said.

“We are trained for hostile environments, but it’s hard to be brave when we meet bodies in dark water,” diver Hwang Dae-sik told Reuters, as the funerals of 25 students were held near the capital, Seoul.

Prosecutors investigating the disaster raided the home of Yoo Byung-un, the head of a family that owns the Chonghaejin Marine Co. Ltd, the company that operated the Sewol ferry. They also raided his son’s home and the office of a church with which Yoo has been associated, said a prosecutor who did not want to be identified.

The finances of Chonghaejin and its complex share structure have come into the spotlight in recent days. Yoo was jailed for fraud for four years in the early 1990s.

But it was not immediately clear how big a development this was. Korean police and prosecutors often make dramatic raids to show that progress is being made in a high-profile case.

In a rare move, the disaster prompted reclusive North Korea, which routinely threatens the South with destruction, to send a message of sympathy. The two sides are still technically at war after the 1950-53 civil conflict ended in a mere truce.

“We express condolences for the missing and dead, including young students, from the sinking of the Sewol,” a South Korean Unification Ministry spokeswoman quoted the message as saying.

Hwang, the diver, said his team had retrieved 14 bodies so far. “We have to touch everything with our hands. This is the most gruelling and heartbreaking job of my career,” he said.

Captain Lee Joon-seok, 69, and other crew members have been arrested on negligence charges. Lee was also charged with undertaking an “excessive change of course without slowing down”.

LAW REQUIRES CAPTAIN TO STAY ON BOARD

Several crew members, including the captain, left the ferry as it was sinking, witnesses have said, after passengers were told to stay in their cabins, even though it was time for breakfast. President Park Geun-hye said on Monday that instruction was tantamount to an “act of murder”.

“The charged crew members appear to have not carried out their duty to rescue the passengers at all,” prosecutor Ahn Sang-don told a briefing. “Based on the fact that they were gathered in the bridge, engine room and so on, then left the boat, we believe negligent homicide is applicable.”

According to Article 10 of Seafarers’ Act, a captain has to remain on board until all passengers have disembarked.

Most of those who survived made it out on deck and jumped into rescue boats, but many of the children did not leave their cabins, not questioning their elders, as is customary in hierarchical Korean society. They paid for their obedience with their lives.

Lee was not on the bridge when the ship turned. Navigation was in the hands of a 26-year-old third mate, who was in charge for the first time on that part of the journey, according to crew members.

The wife of one crew member under investigation who did not wish to be identified quoted her husband as saying: “I should have died out there.”

“He told me that he was taking some rest as he had finished his shift. He fell from his bed and struggled to open the room door to get out. He said he didn’t go to the steering house to meet up with rest of the crew. Rather he was found by coastguards and was rescued.

“My husband didn’t get along with other crewmen, but he told me that Captain Lee was someone comfortable and extremely calm. He said Captain Lee was like no other: he didn’t drink much, although he did smoke.”