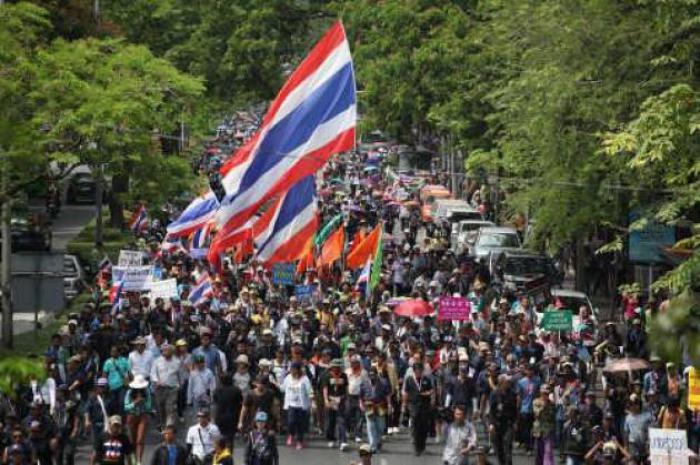 PHUKET: The Bank of Thailand’s Monetary Policy Committee will lower its forecast for the Kingdom’s 2014 economic growth at its next meeting in June.

Paiboon Kittisrikangwan, secretary of the Monetary Policy Committee (MPC), said at its meeting yesterday that prolonged political uncertainty had contributed to a slump in domestic consumption, investment and tourism, which led the committee to believe that the country’s gross domestic product this year will expand by less than it had previously assessed.

The MPC has already announced one cut this year in its GDP growth forecast. This came at its previous meeting in March, when it slashed the forecast from 4.8 per cent to 2.7 per cent.

Another cut at the June meeting will be the second time it has had to revise its prediction downwards due to the country’s political turmoil.

Paiboon said data for the first two months of the year had indicated that growth of the first quarter would be lower than expected, and that – when compared to the final quarter of last year – growth was most likely to be in negative territory.

Paiboon said he did not, however, believe there would be an economic recession this year, thanks to an improvement in the country’s goods exports, which have been boosted by the global economic recovery.

But, he said he did not know when the Thai economy would start recovering, since it was hard to predict when the political conflict would end.

“No one can tell whether we have already passed the lowest point of the economy this year, since there are many uncertainties, but the recovery of major economies should continue to improve the export sector while the condition of the tourism industry cannot get any worse than this,” said the MPC secretary.

Meanwhile, at the same meeting, Paiboon announced that the MPC had voted six to one in favour of maintaining the policy interest rate at 2 per cent, since the economic and political picture was still largely unclear.

He said the current slump in domestic consumption and investment, which had led to the economic slowdown, was not related to matters such as a lack of liquidity or higher production costs, as it stemmed from a lack of confidence caused by prolonged political uncertainty.

“Operators said the number-one factor hindering their ability to do business is political and economic uncertainty, more than changes in the interest rate or a lack of access to finance, which is one of the least of their concerns,” he explained.

When asked whether the MPC would consider lowering the benchmark interest rate again this year, Paiboon said that while the policy space continued to be smaller from inflationary pressure, there were many factors to consider when making changes in monetary policy.

The committee will, therefore, continue to monitor the situation very closely and make sure that the policy stance continues to support the economy, he added.

Gundy Cahyadi, group research economist at DBS Bank, said it was no surprise that the central bank had decided to maintain the policy rate at yesterday’s MPC meeting, but its indication that this year’s GDP growth may be even lower than previous forecast could trigger some reaction in the markets.

He also questioned whether export growth would be enough to sustain the economy this year.

“Export growth still looks decent and it is helping to hold up the economy, but for how long will this be sustained – and one wonders if operators can continue to have business as usual without a functioning government in place,” said Gundy.

At least five shots were fired at Kamol shortly after 2pm. Some struck him in the chest, and he was later pronounced dead at Mayo Hospital. While the motive of the killing is still unknown, those critical of the lese majeste law fear the worst.

“I’m shocked. I didn’t think such a thing would occur today,” said independent political scientist Sirote Klampaiboon, who wrote a preface for what would become Kamol’s last collection of poems in 2011, “Creating People’s Institution”.

“There are new groups like ‘Organisation for the Eradication of Trash of the Land’ [which takes legal action against those who violate the lese majeste law] which is alarming. It makes people feel they’re being hunted, and [believes] force should be used against opponents.”

Anon Nampa, a red-shirt lawyer and poet who has defended many lese-majeste detainees, said Thailand had lost its most vocal red-shirt poet. Anon said that five or six bullets had been fired at Kamol, which suggested an “extreme” motive. Police had not made any arrests as of yesterday.

Former Thammasat University lecturer and anti-lese majeste-law activist Vipar Daomanee said while she didn’t know the motive behind the killing, she couldn’t help thinking it was political. “He was a commoner who became a poet, unlike most poets, who came from well-to-do families,” Vipar said.

Kamol, also known for his activism calling for the release of all political prisoners, was a native of Samut Songkhram. He once made a living selling roast-duck rice and then was a poet for two decades, before becoming politically active after the September 2006 coup.

A graduate of Silpakorn University’s Faculty of Painting, Sculpture and Graphic Arts, he became known for poems published in Matichon Weekly from 1980s to 1990s, and later for poems praising the red-shirt movement.

PHUKET: Democrat Party leader Abhisit Vejjajiva could not attend the meeting with Election Commission (EC) on Tuesday because three intelligence sources had warned him he might be putting his life in danger.

Democrat Party deputy spokesperson Mallika Boonmeetrakool said yesterday that intelligence sources from the People’s Democratic Reform Committee (PDRC), the Democrat Party and state security agencies all warned that Abhisit would not be safe if he attended the meeting, she said.

The Democrat Party has asked the caretaker government to confirm if there was indeed an “assassination” team comprised of a group from Lampang that is allegedly in town to identify the target, a group from Klong Toei and another that created a bloody scene at Ramkhamhaeng University in November last year.