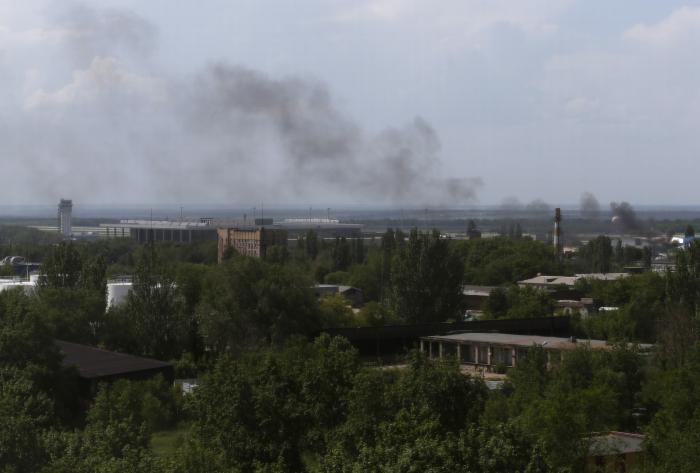 PHUKET: Ukraine launched air strikes and a paratrooper assault against pro-Russian rebels who seized an airport on Monday, as its newly elected leader rejected any talks with “terrorists” and said a robust military campaign in the east should be able to put down a separatist revolt in “a matter of hours”.

Ukrainians rallied overwhelmingly in Sunday’s election behind Petro Poroshenko, a political veteran and billionaire owner of chocolate factories, hoping the burly 48-year-old can rescue the nation from the brink of bankruptcy, civil war and dismemberment by its former Soviet masters in the Kremlin.

Monday’s rapid military response to separatists who seized the airport in Donetsk was a defiant answer to Moscow, which said it was ready for dialogue with Poroshenko but demanded he first scale back the armed forces’ campaign in the east.

Even as the fighting was getting under way, Poroshenko held a news conference in Kiev where he said the government’s military offensive needed to be “quicker and more effective”.

“The anti-terrorist operation should not last two or three months. It should last for a matter of hours,” he said.

As for the rebel fighters: “They want to preserve a bandit state which is held in place by force of arms,” he said. “These are simply bandits. Nobody in any civilized state will hold negotiations with terrorists.”

Gunfire and explosions could be heard as a warplane flew over Donetsk’s Sergei Prokofiev International Airport, hours after truckloads of armed rebel fighters arrived and seized a terminal. Thick black smoke rose from within the perimeter.

The government said its jets had strafed the area with warning shots and then struck a location where rebels were concentrated, scattering the fighters before paratroops were flown in to face them.

Eight hours after it began, fighting was continuing after nightfall and had spread to residential neighborhoods nearby.

“Fighting continues in the airport, with the use of planes and helicopters,” said separatist leader Denis Pushilin. “It’s a full-blown military standoff. I have no information on casualties. Our groups have destroyed one helicopter of the enemy.”

At one point, three Ukrainian Mi-24 helicopter gunships fired rockets and cannon at the concrete and glass terminal. More plumes of black smoke shot up into the air as the helicopters fired at targets on the runway. The gunships threw out decoy flares as fighters shot at them from the ground.

The airport serves a city of 1 million people that the rebels have proclaimed capital of an independent “people’s republic”, and where they succeeded in blocking all voting in Sunday’s election.

Their attempt to seize the airport may have been intended to prevent Poroshenko from travelling there: he has said his first trip in office would be to visit the restive east.

Russia’s foreign ministry urged Kiev to halt what it called “military operations against its own people” and said it wanted the Organisation for Security and Cooperation in Europe to investigate clashes with pro-Russian separatists in Donetsk.

Pushilin called for “any available help from the Russian people”.

Preliminary results, with 80 percent of the vote counted, gave Poroshenko 54.1 percent of the vote – towering over a field of 21 candidates with enough support to avert a run-off. His closest challenger, former premier Yulia Tymoshenko, had just 13.1 percent and made clear she would concede.

German Foreign Minister Frank-Walter Steinmeier told reporters in Sarajevo he was glad no run-off would be required and that people would have to respect the new president’s legitimacy. He also acknowledged Poroshenko had his work cut out to heal Ukraine’s regional divide.

“The doors are open to him, but there is no political paradise awaiting,” he said. “He will have to bridge a gap between the country’s east and west, and I sincerely hope that he will be able to do so.”

Poroshenko’s most urgent task is finding a modus vivendi with the giant neighbor that has seemed poised to carve Ukraine up since mass protests in Kiev toppled a pro-Russian president in February.

Sorting out a dispute over the supply of Russian gas to Ukraine will also be high on the agenda.

Poroshenko said Moscow’s “argument about legitimacy has disappeared” as he had also topped the polls among those who were able to cast ballots in the eastern regions of Donetsk and Luhansk.

“I hope Russia will support efforts to tackle the situation in the east,” Poroshenko said. He said he planned to meet Russian officials in the first half of June.

But he showed no sign of heeding Moscow’s demand that he call off the operation against rebels in the east.

“Protecting people is one of the functions of the state,” he said, promising to invest more in the army. “The Ukrainian soldier should no longer be naked, barefoot and hungry.”

So far, Ukraine’s military forces have had little success against rebels who have declared independent “people’s republics” in two provinces of the eastern industrial heartland where about 20 people have been killed in recent days.

Ukrainian officials say they have held back from using full force in part to avoid provoking an invasion from tens of thousands of Russian troops massed on the frontier. Questions have also been raised about Ukrainian forces’ training, equipment and loyalties.

“The rebels are in the terminal. The rest of the airport is controlled by the Ukrainian national guard,” airport spokesman Dmitry Kosinov told Reuters before gunfire broke out.

The Ukrainian joint forces security operation in the region said a deadline for the rebels to surrender expired and two Sukhoi Su-25 jets carried out strafing runs, firing warning shots. A MiG-29 jet later carried out another air strike.

The militants then spread out across the territory of the airport, whose state-of-the-art main terminal was built for the 2012 European soccer championships held in Ukraine.

Russian President Vladimir Putin, who last month described eastern Ukraine as “New Russia”, has made more accommodating noises in recent days. He promised at the weekend that Moscow would respect the will of Ukrainians, and Foreign Minister Sergei Lavrov repeated that promise on Monday in saying Russia was ready for dialogue with Poroshenko.

Western countries put little faith in Putin’s promises, saying he has repeatedly announced he would pull troops from the frontier without doing so. They dismiss Russia’s denials it has aided the rebels, whose Donetsk force is led by a mustachioed Muscovite the EU says is a Russian military intelligence agent.

But Poroshenko’s victory could ease pressure for extending sanctions against Russia when EU government leaders meet in Brussels on Tuesday evening.

“We are not going to go forward on this for the moment,” one senior EU diplomat told reporters on Monday.

Even though separatists ensured that millions of Ukrainians were unable to vote in the eastern regions, Poroshenko’s sweeping margin of victory gives him a firm mandate that makes it harder for Moscow to dismiss him as illegitimate, as it did in the case of the interim leader