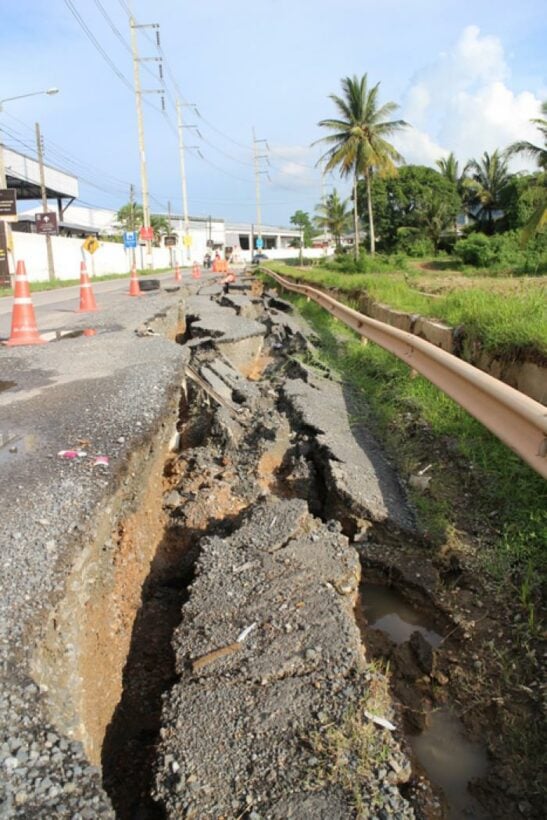 PHUKET: A section of a busy road in Koh Kaew has collapsed, but despite a circle of finger-pointing by local officials, no repairs are likely until next year, due to lack of funds.

The road, Soi Koh Kaew 33, behind the Isuzu dealership on Thepkrasattri Road, leads to local villages and housing developments and is used as a shortcut to Kathu and Patong.

Repairs made months ago failed almost immediately and now deep crevasses run down one lane, causing large chunks of the road to split off.

“We fixed that section once because we were worried about villagers, but the Department of Rural Roads is actually responsible for it,” said Pranom Keawprang, the Chief Administrative Officer of the Koh Kaew Tambon Administration Organization (OrBorTor).

“We have a plan to fix it,” Teeraporn Jirarattnakorn, Chief of the Department of Rural Roads Phuket Office, told the Phuket Gazette.

“We asked the Phuket Provincial Administration Organization [PPAO] for 9 million baht, and they said we would get it this year, but then they postponed it to next year. I don’t know why.

“I know it’s a problem, but we don’t have the money to do anything. My hands are tied.”

One PPAO official laid the blame with the local OrBorTor.

“The problem was caused by the trucks. Normally 10-wheeled trucks are not allowed to use this street, but the Koh Kaew OrBorTor allowed it,” said Winit Hongatikul, Secretary to the President of the PPAO.

Another PPAO official, Public Works Director Wassana Srivilai, said he was aware of the problem but didn’t have the funds to help.

“We promised to help the Department of Rural Roads, but I don’t think we will have the money this year,” he said.

Meanwhile, local traffic continues to squeeze by the orange cones demarcating the collapse and those who use the road are left to ponder the delay.

“When will it be fixed? Or do they want this road to kill someone?” mused one local resident who declined to be named.