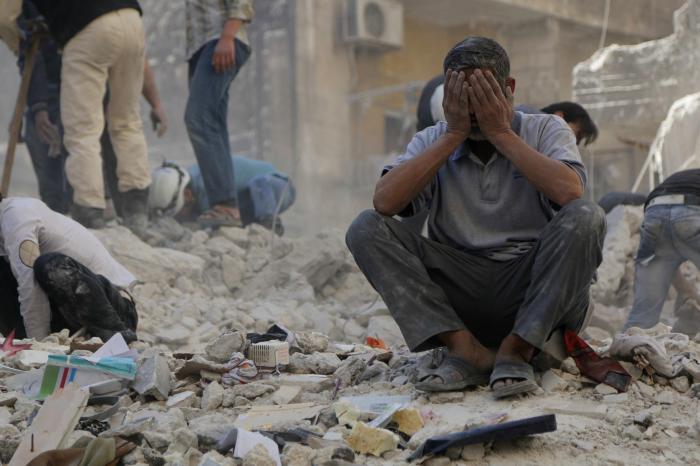 PHUKET: An air strike on a school in Syria’s northern city of Aleppo by President Bashar al-Assad’s forces killed at least 18 people on Wednesday, mainly children, a day after attacks on government-controlled cities killed more than 100 people, activists said.

The devastating strikes, which stand out for their ferocity even in a civil war which now kills between 200 and 300 people a day, come as Syria prepares for an election likely to extend Assad’s grip on power.

On Tuesday, a day after Assad nominated himself to run for a third term in a vote already derided as a sham by his opponents, two car bombs struck in a government-controlled part of Homs.

The Syrian Observatory for Human Rights monitoring group said on Wednesday the death toll from those bombs had risen to 100. A mortar attack on a school, which authorities blamed on “terrorists” battling Assad, also killed at least 14 people.

Wednesday’s air strike on the Ain Jalout school in the Al-Ansari district of Aleppo appeared to be part of the sustained bombardment of the contested northern city by Assad’s forces.

Pictures from the school showed blood on corridor walls and debris in classrooms, while video footage released by activists at the anti-Assad Aleppo Media Centre showed more than a dozen bodies which appeared to be children laid out on a tiled floor.

The Observatory put the death toll from the attack at 18, while the Aleppo Media Centre said 25 children had been killed.

For months Assad’s forces have dropped barrel bombs – crude but powerful explosives which are not designed for precision targeting – on rebel-held parts of the city, despite an appeal from the U.N. Security Council two months ago for a halt.

The U.S.-based Human Rights Watch said this week it had documented 85 sites in Aleppo hit by aerial bombardment since the Security Council’s appeal.

More than 150,000 people have been killed in Syria’s three-year-old conflict which grew out of protests against Assad’s rule in March 2011. The United Nations says 6 million people have been displaced in Syria and another 2.5 million refugees have fled abroad.

Forces loyal to Assad, who is expected to face only a token challenge in the June 3 election, have been consolidating their hold around Damascus and the centre of the country, backed by Iraq Shi’ite fighters and Lebanon’s Hezbollah.

But the mainly Sunni Muslim rebels and foreign jihadis have pushed his troops out of swathes of northern Syria and the oil-producing and agricultural east of the country.

Brunei adopts sharia law, others in region consider it