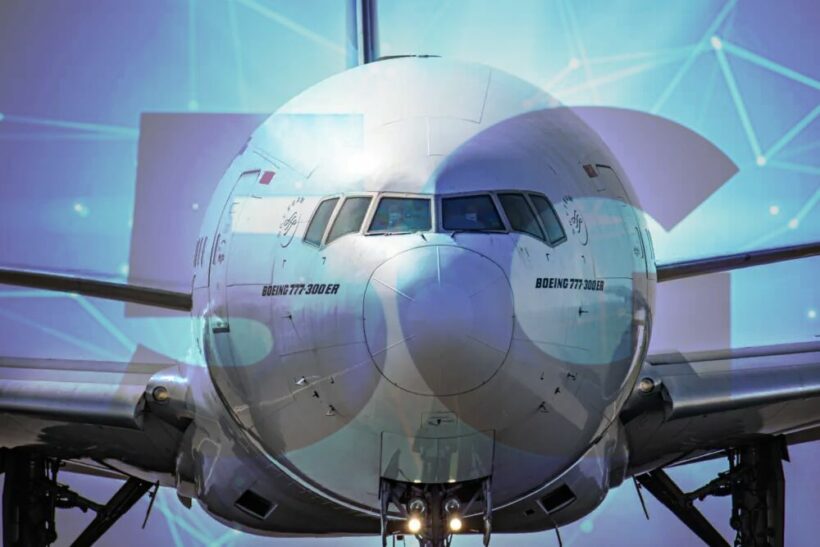 PHOTO: Airlines change flights to the US as 5G may interrupt equipment on Boeing 777 and 747-8 planes. (via SimpleFlying.com)

Fear of 5G interference around American airports is spurring airlines from around the world to cancel or reschedule flights to the US. At least 25 flights to the US were cancelled today with many airlines saying they will cancel more as they scrambled to change the type of aircraft used to avoid interference as AT&T and Verizon Communications roll out their 5G services.

The main concern is over the frequencies used in 5G that may clash with the frequencies used by equipment on the Boeing 777 and the 747-8 planes. The 5G signal could interfere with navigation equipment that’s used to land when the weather is bad and visibility is hindered. Sensitive equipment like radio altimeters which crucially monitor a plane’s altitude as its landing and numerous critical safety systems that are fed by the altimeter could be harmed by this interference.

The problem is unique to the United States because they’re the only country that has allowed mobile carriers to license any part of the airwave spectrum. Other countries have had many more limitations to what frequencies private companies could license and use.

After emergency last-minute meetings with government officials, AT&T and Verizon agreed on Tuesday evening that for safety sake, they would delay turning on hundreds of cell towers transmitting 5G in proximity of American airports. They did not specify how long they would delay the launch or how big of a radius they would not switch on near airports. Joe Biden, president of the US, said that the agreement to delay launching 5G around airports was a necessary step that helps avoid potentially devastating disruptions for cargo as well as passenger flights.

The telecommunication giants bought the rights to use the 5G frequencies last year in a US $80 billion deal after the Federal Communications Commission concluded in their research that the use of the frequencies by mobile phone companies would not interfere with the safety of aircraft and airports. But now it seems that interference may be an issue for 777 and 747-8 aircraft, 2 of the most popular plane models in use today.

In the US, Delta Airlines said they’re making plans for possible cancellations, while many international airlines have canceled or rearranged flights. Emirates plans to suspend flights the several American destinations, while Japan Airlines and ANA are canceling their 777 planes to the US. British Airways canceled a few flights and switched out planes for Airbus SE A350 and Boeing 787 aircraft. Korean Airlines are scrambling to rearrange which planes they use to fly to the US, while Air India said they will cancel or change call their service.

Lyp14 [ctxa]
Boeing again...... We, Europeans, have at last beat the Americans at something... I'm not particularly fond of the EU, but this feels amazing.

ThaiEyes
6 hours ago, ctxa said: Boeing again...... We, Europeans, have at last beat the Americans at something... I'm not particularly fond of the EU, but this feels amazing Interesting read: How 5G Clashed With an Aviation Device Invented in…

Rain
Looks like the Yanks to upgrade themselves to the times. Although, most of this crap is purely political.