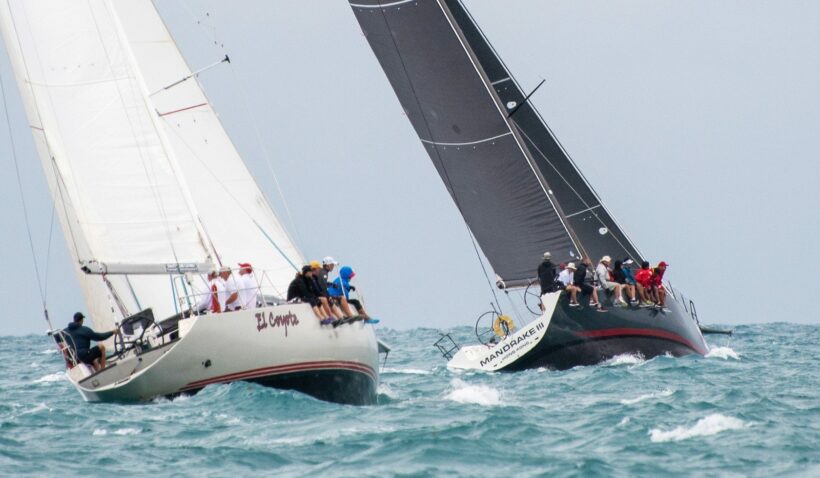 Early morning thunder and lightening made way for a wet and breezy start to Day 2 of the 2018 Samui Regatta. The four classes lined-up in 10 knots of wind topping out at 15, and it was the IRC classes off first with a quick windward/ leeward. They were then sent on the same course as the Performance Cruising and Multihull classes, south of Chaweng past Lamai Beach, rounding Koh Rap off Samui’s southern tip and finishing off Hin Ang Wang Reef.

In their eagerness to get going, the IRC Zero fleet faced a general recall. When they did finally get underway it was the Chinese team lead by Chen Fulin on Ark 323 who showed their intent. Having improved race-by-race yesterday they are clearly on a mission and in the first race they corrected out in second place, ahead of the larger 66-foot Alive (AUS). With less than two minutes separating second to fifth place, the racing was close but still nobody could stop series leader THA72, who added another win to their scorecard.

With the wind dropping off in the second race, it played into the hands of light-air specialists WindSikher (SIN), who corrected out in second place more than eight minutes ahead of Alive in third, and two-and-a-half minutes behind THA72 whose fifth bullet of the series sees them comfortably at the top of the standings.

In the TP52 division there’s no change at the top as THA72 extend their lead on the back of two wins today. However, a 3,2 for Freefire (HKG) see them tie Ark 323 on points and claim second place overall on count back. After a second place finish in the first race of the series, Team Ulumulu (MAS) have struggled to keep up with the others and no doubt will be looking to rectify this tomorrow.

It was all change at the top of IRC One today with Hong Kong entry Mandrake III dominating. Claiming the daily double in both races they narrowed the gap to series leaders Loco (SIN) and now sit second overall, just one point behind. Two second places for Loco keep them at the top, just, while two third places today for Fujin (AUS) see them strengthen their claim to third overall.

The Performance Cruising and Multihull classes were both given a single long race south of Chaweng, and while they started in good breeze by the time they’d rounded the headland and were crossing Lamai Bay, the winds were softening, turing what was expected to be a fast ride into an endurance challenge.

Souay 1 (CAN) continued their winning ways, mastering the mixed bag of conditions and adding another win to their tally, while a second place for SailQuest Hi Jinks (THA) keeps them in second overall, two points ahead of the smallest boat in the class, Moon Shadow (THA).

Change at the top today as Pixalux (AUS) take their first win in the Multihull class.

In the Multihull class Pixalux (AUS), skippered by Mick Tilden, revelled in the conditions and secured their first win of the series. A second place for Andy Pape’s Sudu Red (GER), however, ensures they stay top of the standings while another third place finish for Sudu Grey (THA) keeps them third overall.

After two days of racing competitors have faced a wide range of conditions – light airs, storms, sun, rain and a decent 15 knots at times today.