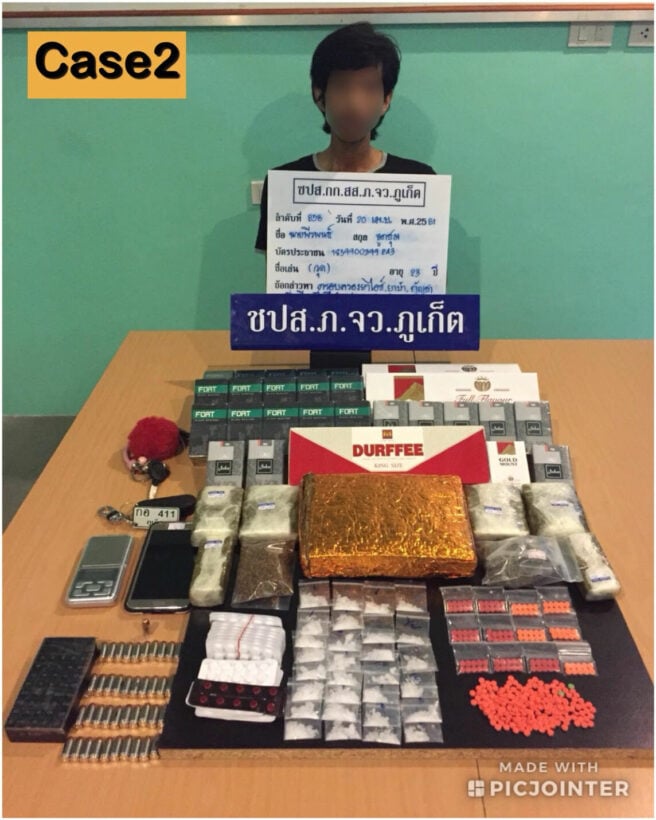 Three local men have been arrested following the drug crackdown period between April 19-21 with a long list of drugs.

The first two men, 42 year old Weerapan Intarakratok and 23 year old Thanapas Rakwet, were arrested after the police received a report from an undercover officer that Thanapas sold methamphetamine to juveniles in the Kathu area. Police lured him to buy drugs and caught him with 41 amphetamine pills, 1 gram of methamphetamine, 15.25 grams gold necklace and 3.81 grams gold ring. He was arrested in Soi Wichit Songkram 2.

Thanapas confessed that he transferred drugs to Weerapan who was later arrested before bringing the police to the house where he hid the drugs.

On that night (April 19), police arrested 23 year old Peerapon Judchum in Soi Sakdidech, Wichit area, with 306 methamphetamine pills, 24.2 grams of crystal methamphetamine, 17 blister packs of tranquillizer (Clonaril, Convulsil) (170 pills), 1,540 grams of marijuana, 66 boxes of untaxed cigarette, 41 bullets of .380 auto, a mobile phone and a digital scale. His car and motorcycle were also seized by the police.

Peerapon was reported by an undercover officer for selling drugs and was on bail. Police lured him to buy drugs but he fled after the police revealed themselves. Police tracked him down and arrested him at his house. He told police that he ordered drugs from a drug dealer on social media who shipped him the drugs via post.

Celebrities quizzed over endorsement and ads for dodgy cosmetic company