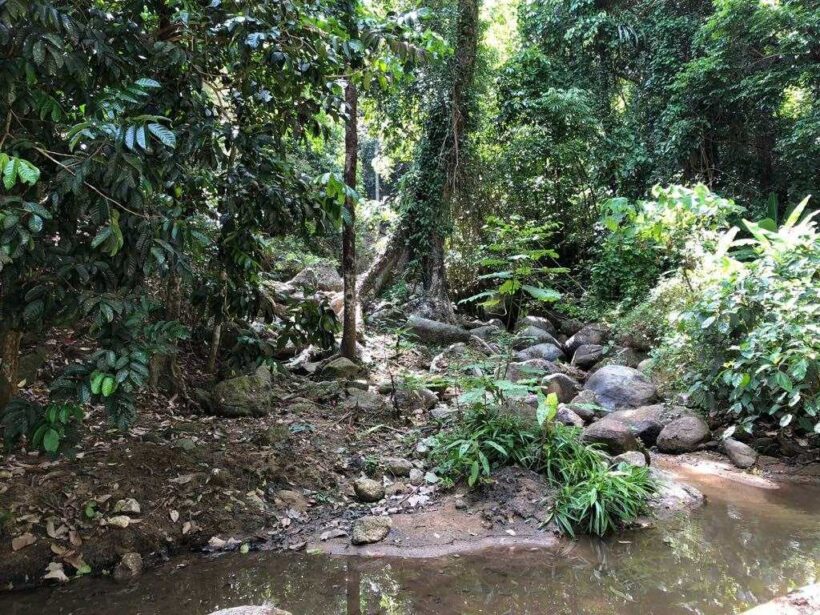 The Great Expedition continues to find the famed Ancient Route To Kamala from the sleepy Kathu valley. In our second attempt to get over the hill from tracks off Soi Namtok (leading to the Kathu Waterfall) our intrepid adventurers failed again to find the Great Hidden Track. Last time we headed up the road where tourists are taken for the Flying Hanuman zipline rides. In that case we nearly got to the top of the hill of the Kathu side after an hour on a motorbike before the tracks became unpassable.

“We are all going on an Expedition,” said Christopher Robin, as he got up and brushed himself. “Going on an Expotition?” said Pooh eagerly. “I don’t think I’ve ever been on one of those. Where are we going to on this Expotition?”

It doesn’t look like it but that track is at a 45 degree gradient and a challenge indeed for most motorbikes, or 59 year olds!

This time a route was taken closer to the Kathu Waterfall where at least Google Maps showed a track leading over the hill and down into either Kamala, coming out near the back of Phuket Fantasea, or to Kalim.

This time the Expedition was undertaken on a pair of motorcycles perfectly suited for the journey (NOT!). A standard Honda iClick and Zoomer didn’t have the road clearance or suitable tyres to tackle the largely impassable tracks. In this case the tracks were mostly made up of concrete crudely laid over the existing jungle routes – already broken up from years of neglect. Along the way there are signs of some clearing, a few small rubber plantations and some rudimentary irrigation for hastily set up huts. There were also some amazing stands of bamboo, some reaching up to 12-15 metres into the air.

The tracks are certainly a lot more suitable for a trek on foot but you would need to be adequately prepared for an extended time in the jungle – there are no 7/11s along the way.

This time the track proved impassable almost at the peak of the hills. We almost got to enjoy the view beyond to Kamala this time. Google maps were, well, slightly over-enthusiastic with their publishing of a track! Next time we’re renting two ATVs to see if we can penetrate a bit further and then proceed on foot.

If you do want to investigate yourself take plenty of water and be prepared for failure as much of the road is not suitable for even the best off-road motorbikes, let alone a six year old iClick!