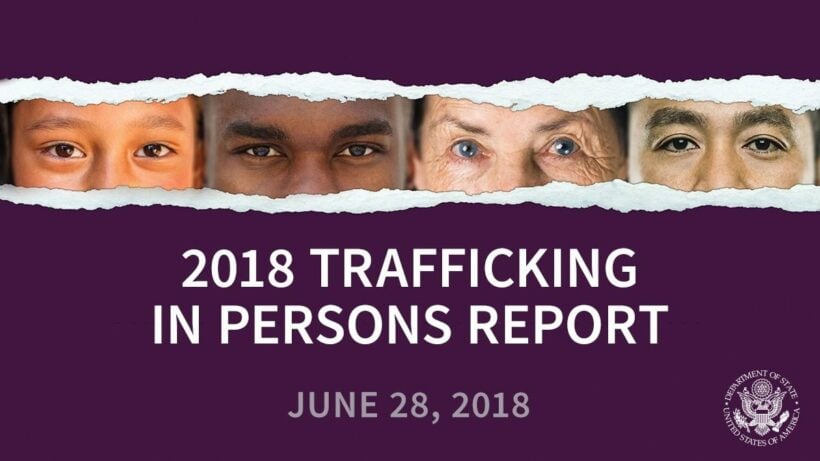 The latest US Trafficking in Persons has been released today with some better news for Thailand’s government.

Thailand’s status in the US Trafficking in Persons report (TIP) has been upgraded to Tier 2 for its efforts in combating modern slavery.

The TIP 2018 report, launched by the US State Department in Washington, says the Thai government has demonstrated increasing efforts by prosecuting and convicting more traffickers, and decreasing prosecution time for trafficking cases through the use of specialised anti-trafficking law enforcement divisions.

The authority also investigated more cases of suspected official complicity in trafficking crimes and convicted 12 complicit officials in 2017, including 11 officials involved in the trafficking of Rohingya migrants.

Thailand, since the military coup in 2014 was downgraded two consecutive years to the lowest tier for its failure to meet the US minimum standards for the elimination of trafficking, notably in the Rohingya who fled from violence and discrimination in Myanmar’s Rakhine state.

The military government efforts yield a positive result in 2016 and 2017 when senior military officers were prosecuted for their involvement in trafficking syndicated.

“Thailand remains deeply engaged in strengthening cooperation and partnership with all stakeholders in a whole-of-society approach, and will continue to work closely with concerned international organizations and various countries, including the US, in our ongoing attempt to end trafficking in persons,” it said.

CNN is reporting that the State Department released its annual Trafficking in Persons Report, highlighting the state of human trafficking across the globe by ranking countries on their efforts to tackle the issue. But the report, released as the US government faces international scrutiny for its processing of migrants along the southern border, is careful to differentiate between cases of “trafficking” and “smuggling.”

Secretary of State Mike Pomeo and Special Advisor to the President Ivanka Trump present Maizidah Salas of Indonesia with an award for her advocacy work during an event marking the release of the Trafficking in Persons report.

Link to the full report HERE.

‘Forest Rescue’ campaign to save trees in and around Bangkok