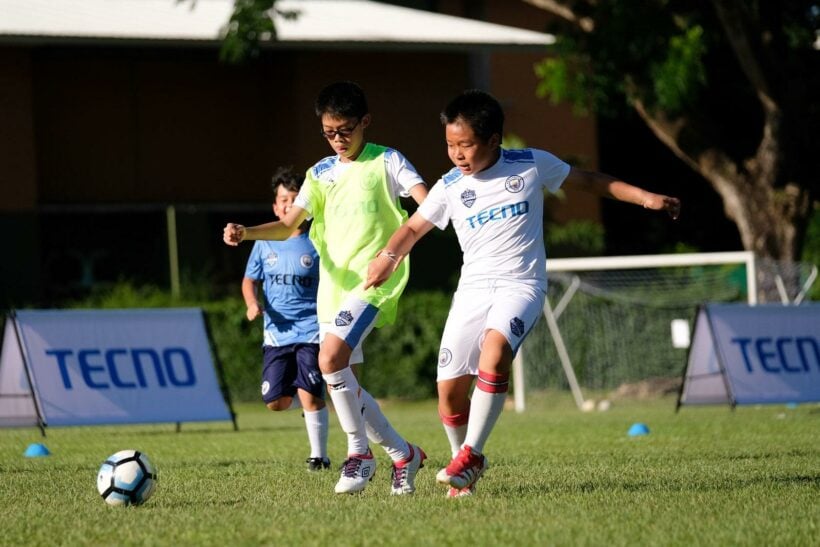 Football inspires Thai people like no other sport. Whether a player, spectator or follower of an English Premier League team, Thai people are passionate about the sport and unwavering in support of their team. Thai youngsters play football from an early age at schools, on the streets, in the parks and dream of one day becoming a professional like their favourite international football stars.

“Sport, and football in particular, is unique in its ability to bring people together. Through our “TECNO BlueSquad” initiative we want to not only give youngsters the opportunity to learn football skills from the best in the world and develop their talent, but also to develop confidence, leadership and discipline, whilst learning the importance of teamwork. We wish to encourage them to dream big and aim high – perhaps one day they will become professional footballers and play in the English Premier League,” said Philex Meng, CMO of TECNO Mobile.

Football has developed rapidly in Thailand. The country is home to some of the best leagues in Asia with Thai teams competing on the regional stage and professional footballers playing in leagues around the world. The Thai Men’s team will compete in the Asian Cup in January 2019, the Women’s team have qualified for the FIFA Women’s World Cup in February 2019, and with the FIFA World Cup due to kick-off in Russia later this month, interest in football is at an all time high.

The football clinic provides a fun and educational environment away from the classroom in which youngsters can learn and grow, encouraging them to believe in themselves and follow their passion. Participating youngsters will be inspired with then meet football idol and Manchester City FC legend Shay Given, who is in Asia for the first time.

Having launched TECNO Mobile into Thailand in 2017, Chiang Mai is a strategic regional market and David Chan, Country Manager of TECNO Thailand explained: “We wanted to offer something new for Thai football fans and our customers. “Experience More” is at the heart of TECNO Mobile’s DNA and that is very much what these football clinics are about. We believe in providing our customers with the best quality product and to enrich their recreational lifestyle. Working with Manchester City Football Club globally and partnering with them on the TECNO BlueSquad initiative allows us to reach out globally while at the same time engage with local communities.”

TECNO Mobile’s partnership with Manchester City FC brings customers and fans of both closer together. Through the company’s “Glocal” approach to development, TECNO Mobile provides customised high-quality products through its sales network covering more than 40 emerging markets around the world.

FACTS ABOUT TECNO:
• For 12 years have focused on a camera-centric smartphone with optical research (the objective is to produce smartphones that can take the most beautiful photos, especially selfies).
• TECNO operates in more than 40 countries globally.
• 167 million sets of mobile phones have been sold from 2006-2017.
• 300,000 units sold per day worldwide.
• 100 days and 12+1 month after-sale guarantee.