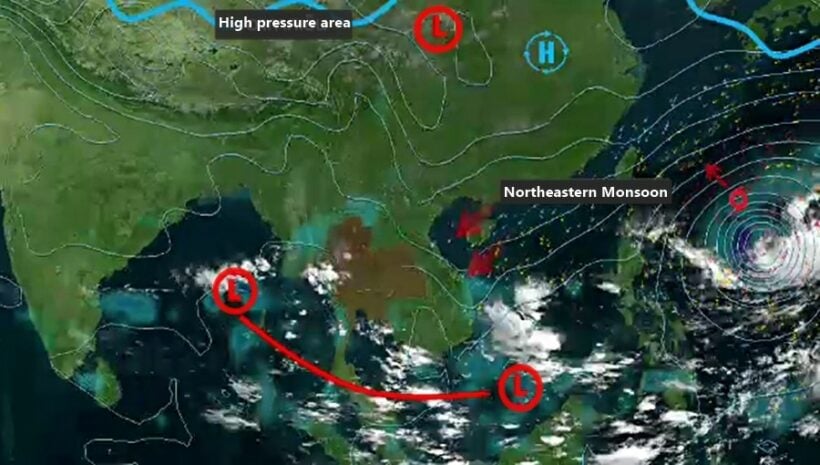 The forecast path for the tropical storm

A new storm is forming in the South China Sea and expected to move westwards across the Gulf of Thailand and hit the southern sections of Thailand next week. The storm warning came from the Thai Meteorological Department yesterday.

The storm is forming as a result of a low pressure in the South China Sea from this Monday. It is expected to gain strength to become a depression and move over the southern tip of the Vietnamese peninsula on October 31 before moving across the Gulf of Thailand on November 1. At this stage, landfall for the tropical depression is predicted to be around the Pranchuab Kiri Khan region on the western seaboard of the Gulf of Thailand.

Therefore, from October 30, small vessels are being told to remain ashore. The depression is expected to hit southern Thailand from November 2.

A better idea of the westward path of the storm is expected to be known by Monday.

Meanwhile 19 Provinces are struggling with flooding and about 300,000 people have been affected. The Disaster Prevention and Mitigation Department have issued a list of grim statistics. They include 10 deaths.

Department director-general Chayapol Thitisak says that, from October 10 until yesterday, 78 districts in 23 provinces had been flooded, affecting 125,116 households – an estimated 325,000 people.