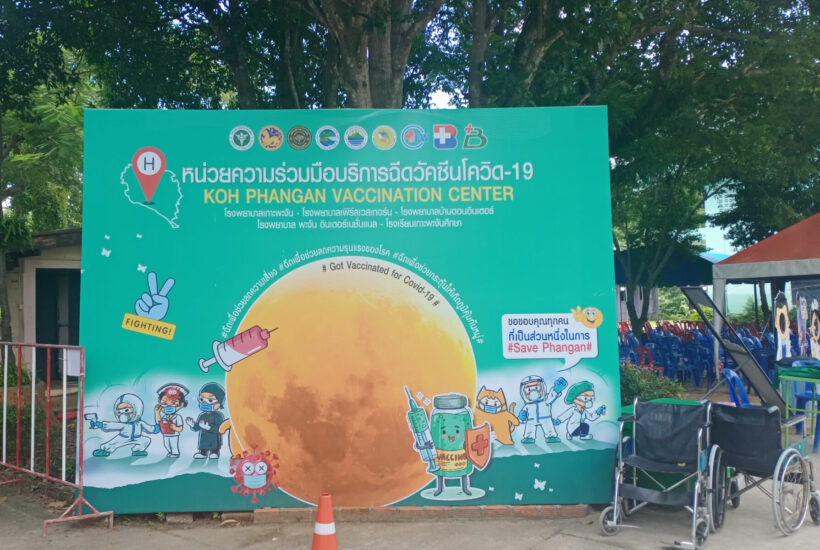 PHOTO: Koh Phangan had its first booster shot drive today. (via The Thaiger)

Koh Phangan kicked off its drive to give third booster shot vaccinations to the local population today, ahead of the October target in Thailand, with a goal of 1,300 injections today and more to come. The event took place at the Koh Phangan Sueksa School in Thongsala Moo 1 near Big C.

At the school, workers were administering AstraZeneca booster shots to people who had received 2 Sinovac vaccines in Phangan already. Of note, the full vaccine doses were administered intramuscularly unlike Phuket where booster shots were recently switched to a new subdermal injection method that puts 20% of a normal dose just under the skin instead of into the muscle.

While some exceptions were made for residents or people who had been vaccinated on the neighbouring islands of Koh Samui and Koh Phangan, hospital officials stressed it is much easier to survey the demand on each island and ship vaccines from Koh Samui where they are received to the other islands, so they discouraged people from island-hopping to get booster shots or vaccines.

Mr Somchai, an employee of the Koh Phangan Hospital who is a member of a team of about 10 people who handle vaccine-related issues for the hospital spoke with The Thaiger about the event. He said that this was the first time booster shots were administered on Phangan island, but he expects more to come soon as a large amount of the island population – he guestimated about 90% – have already received 2 doses and were fully vaccinated.

Previous vaccine drives were held onsite at the hospital, but Somchai cited lack of space and shade, explaining that vaccination dates that expect bigger turnouts, more than 500 people, will be organized at the school, using their large covered assembly hall. Phangan community members commented that the booster drive at the school was faster and more comfortable than the original vaccination events at the hospital.

PHOTO: via The Thaiger

The date of the next opportunity to get vaccinated has not yet been confirmed, with hospital officials stating as soon as they get confirmation of the next round of vaccines arriving in Koh Phangan they begin arranging a vaccination date and location.

To find out about future vaccination events, the hospital suggests following their Facebook page where they post updated information and vaccine dates.

PHOTO: via The Thaiger

AdvocatusDiaboli
1 hour ago, Stonker said: Locally many who were given 2 x Sinovac are simply resigned to "starting again" with AZ - particularly as most of the nurses and hospital staff had 2 x Sinovac. So that’s why 4 doses,…