Early this morning (March 6), a 33 year old local man, Attapong Treesuk, was robbed while waiting for his girlfriend, by a man identified as 28 year old Wirat Sakkaew, who was carrying a knife and a gun to threaten him and steal his mobile phone.

During the robbery, they fought and both were injured by the knife before the thief fled on his motorbike with the phone.

According to Attapong, who received a cut on his face and was stabbed in his stomach and left chest, he followed the thief with his motorcycle to try and get his phone back. Wirat fell from the bike on the way and tried to stab Attapong again but there were witnesses this time who helped him and rushed him to Thalang Hospital.

Thalang Police received an incident report at 3am and found the dead body of Wirat at the scene of their last tussle on Thepkasattri roadside. Police found 2 knives and a .38 Thai Pradit gun.

Wirat’s fatal injuries were to his left chest, neck, and back.

Police believe that he already robbed other victims in the Thalang area using the same method a few times before. 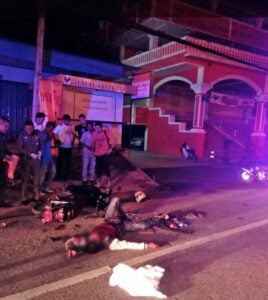