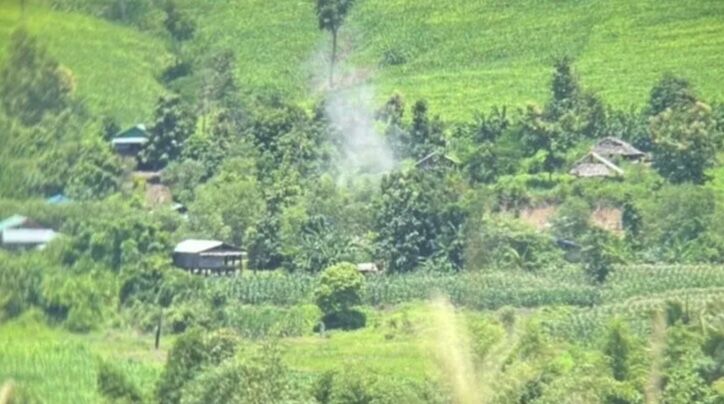 Burmese and Karen forces battled each other for seven hours yesterday, close to the border between Myanmar and Thailand’s northern Tak province. It was the second day of consecutive fighting between the Burmese junta army, and the Karen National Liberation Army alongside Myanmar’s People’s Defence Force.

The Burmese army had arrived in a Karen area aiming to capture it, but the KNLA and its allies were prepared. The KNLA and PDF forces ambushed the Burmese troops, and a fierce battle broke out. The Burmese troops fired heavy mortars at the Karens, who fought back with heavy machine guns.

As with many similar incidents in the past, several Karen villagers crossed into Thailand to escape the fighting. About 188 villagers slipped into Tak’s Popphra district, managing to find shelter in a temple there. Thai security forces expect the clashes to continue, and if the situation worsens, for more refugees to flood into Thailand.

This news comes after a Burmese fighter jet bombed a Karen village earlier this month, also near the Thai border. Two villagers were killed, three were wounded, and 92 were forced to flee to Thailand. Most of those who fled were women and children.

The Karen hill tribe in Myanmar and several other minority groups have been fighting for greater autonomy since Myanmar gained independence in 1948.

Paulw
When is the rest of the world going to tell the Burmese Junta that this enough, its time to stop. The bombing of villages is absolutely unacceptable from an illegally self imposed Junta. Thailand should hang its head in shame…

Benroon
1 hour ago, Paulw said: When is the rest of the world going to tell the Burmese Junta that this enough, its time to stop. The bombing of villages is absolutely unacceptable from an illegally self imposed Junta. Thailand should…

DesperateOldHand
2 hours ago, Paulw said: When is the rest of the world going to tell the Burmese Junta that this enough, its time to stop. The bombing of villages is absolutely unacceptable from an illegally self imposed Junta. Thailand should…
ChrisS
Pity the poor refugees, the only place they can run to is another country being run by military junta!

More tigers in Thailand than any other Southeast Asian country