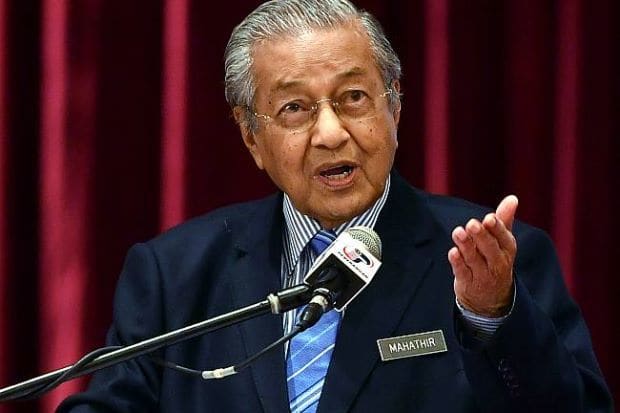 “This is done by people who have political agendas,” said the PM after attending a fund-­rai­sing event last night.

The 93 year old Malaysian prime minister claimed people could “produce any kind of pictures they wanted if they were clever enough to do it”.

He said his impacted cabinet member had attended the weekly meeting as usual yesterday. Earlier in the day many government party leaders described the matter as “gutter politics”.

They want action to be taken against Muhammad Haziq Abdul Aziz – an aide to Deputy Primary Industries and Commodities Minis­ter Datuk Seri Shamsul Iskandar Mohd Akin – who implicated Azmin. Later yesterday, Azmin issued a strongly worded statement denying he was in that video despite being clearly depicted in the short video of the two men on a bed.

Meanwhile another video emerged late yesterday with even clearer images of the two men clearly identifying the accused Minister.

Party vice-president Zuraida Ka­­ma­­ruddin expressed her undivided support for the minister implicated in the video and vouched for his credibility, integrity and leadership. Zuraida also took a swipe at Haziq’s credibility, saying that he must be brought to justice.

Many other ministers rushed to the defence of their cabinet colleague defending his reputation and pouring scorn on the man who identified him.

Muhammad Haziq Abdul Aziz confessed in a video recording yesterday to being the man in the sex video.

In the 30 second clip posted on his Facebook page at 2.30am yesterday, Ha­­ziq named the minister who was allegedly the other man in the video. He said the recording of the alleged sex act was done without his consent on May 11 at the Four Points Hotel during the recent Sandakan parliamentary by-election.