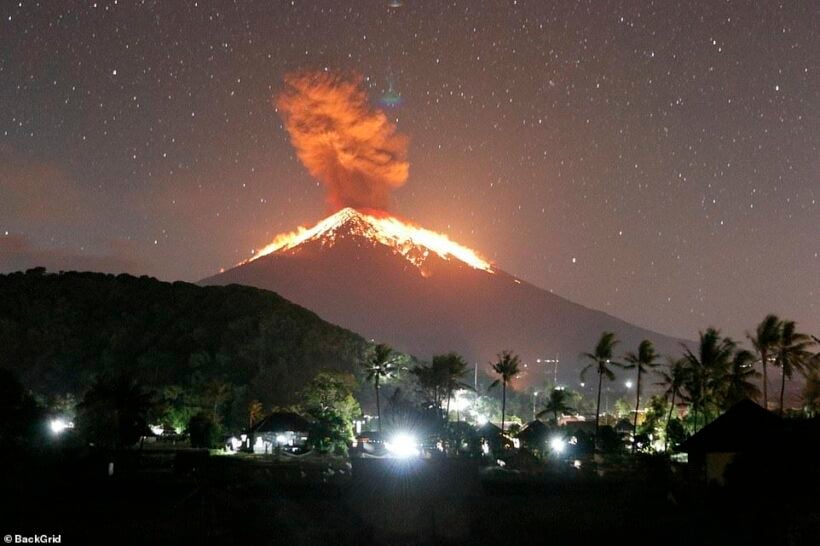 Mount Agung, Bali’s active volcano, has erupted again, spewing ash and hot lava that ran down 3 km from the crater, causing authorities to cancel flights in and out of Denpasar.

Indonesia’s Center of Volcanology and Geological Disaster Mitigation (PVMBG) says the eruption was recorded at 19:30 Central Indonesian Time (WITA) and lasted for 4 minutes and 30 seconds.

The eruption also threw smoldering lava and pieces of stone into the air, fell in areas around 2.5-3 km from the summit. PVMBG say the current alert level on Mount Agung is set at Level III.

Residents, trekkers and tourists are strictly prohibited to be around the red zone areas set at 4 km away around Mount Agung summit.

Bali airport has cancelled all flights following an eruption of the Mount Agung volcano that spread ash over the south of the Indonesian island.

A Mount Agung eruption in November in 2017 also forced the authorities to close down the airport for several days, hampering tourism in Indonesia’s popular island destination.

The volcanic disaster had forced over 43,000 residents in Bali’s eastern regencies to refuge in shelters. Dozens of elder refugees died in the shelters due to the ensuing eruption.