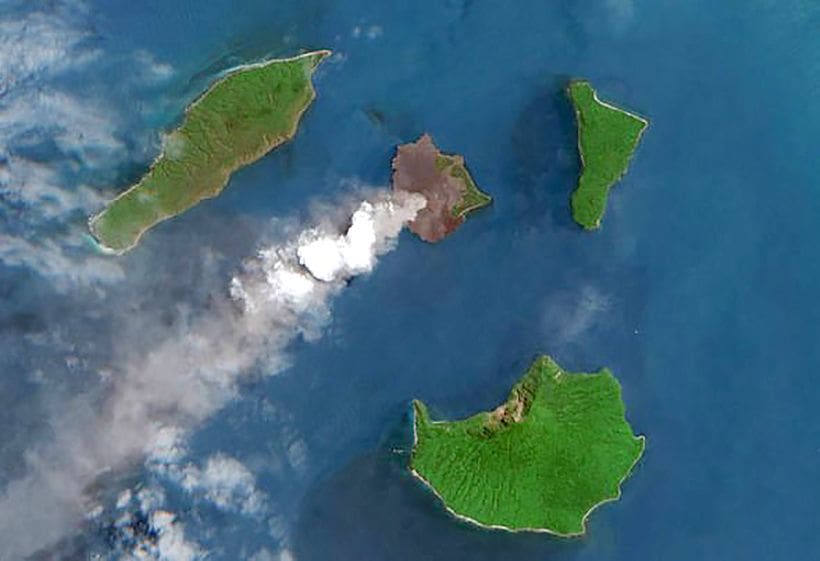 A section of the Anak Krakatoa’s crater (Child of Krakatoa) collapsed after an eruption and slid into the ocean, generating the tsunami last Saturday night.

An analysis by the local volcanology agency found the volcano has lost more than two-thirds of its height.

Anak Krakatoa, which used to stand 338 metres has now been whittled down to 110 metres tall.

The agency estimated the volcano lost between 150 and 180 million cubic metres of material as massive amounts of rock and ash have been slowly sliding into the sea following a series of eruptions.

Before and after satellite images taken by a Japanese satellite shows that a two square kilometre chunk of the volcanic island slid into the waters of the Sunda Strait.

The volcano was a new island that emerged around 1928 in the crater left by Krakatoa, whose massive 1883 eruption and explosion killed at least 36,000 people from the scant records available at the time).

An exclusion zone has been extended from two to five kilometres.

A week after the tsunami, thousands of Indonesian Muslims attended a mass prayer yesterday to remember the victims and pray for the safety of their tsunami-prone hometown.

Authorities say at least 426 people were killed and 23 remain missing in the disaster. Some 7,202 were injured and nearly 1,300 homes were destroyed after the waves crashed into the coastlines of western Java and southern Sumatra.

Malaysians citizens being warned about travelling to Thailand’s south