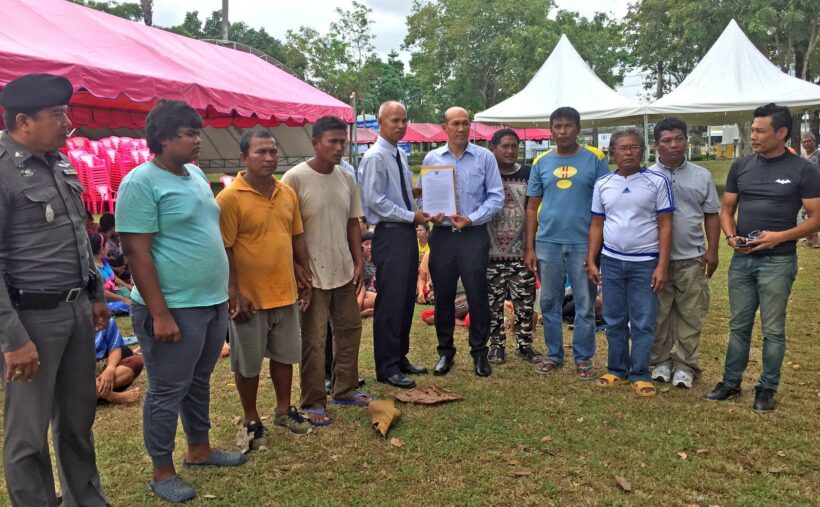 Rawai’s Mayor, Arun Solos, led a group of Rawai Sea Gypsies to file a complaint this morning (January 11), in order to call for justice for the 6 fishermen arrested in Sirinath Marine National Park.

The mayor headed a delegation including Niran Yangpan, the community leader, village chief and sub-district chief with the 6 fishermen to hand the letter to Vice Governor Sanit Srivihok, who says he will pass it to the Governor. The letter also asks for details about the cabinet resolution in 2010 about the policy to “restore sea gypsy traditional lifestyle”.

“As I talked to the fishermen, they all denied fishing in the National Park area as accused but anchored there to let one of the fisherman recover from decompression. The shellfishes on the boat were from Phang Nga. The officers wouldn’t listen to them so we all come here to file a letter and appeal for justice,” said the Rawai Mayor.

One of the 5 fishermen arrested in the sea area of Sirinath Marine National Park, 43 year old Pichit Bangjak, explained yesterday (January 10) that the group of 6 (including one 14 year old boy) left from Rawai Beach on January 6 and arrived at the targeted area to fish which was in Kuraburi District of Phang Nga in the evening of the same day. They fished and rested there until the night of January 7 when his nephew, Thanongsak Koh-Ngam started to feel sick and suffered from decompression syndrome after their deep dive at 30 meters to fish, where they stayed about 1-2 hours in the water per time so they decided to come back.

“In the morning of January 8, while the boats were in Phuket sea and were in front of Nai Thon Beach (where is the area of Sirinath Marine National Park), we anchored because my nephew said he felt worse. We decided to let him get into the water to recover following our traditional way of treatment. We couldn’t wait until we arrived onshore because decompression can be deadly or cause paralysis.”

“When he was in the water recovering, there were other 2 fishermen in the water as well. I was cooking for him on the boat waiting for him when the national park officers parked their boat next to us. They commanded us to stop cooking and pulled my nephew from the water very fast without asking anything which could make his condition even worse,” he said. 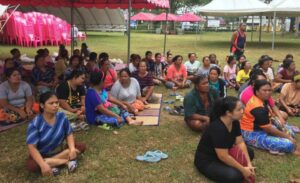 “The arrests affect their daily life and their work. They also had to find money for the bail. We also seek clarification of the cabinet resolution to make the sea gypsy people clearly understand about what they can do to restore their lifestyle,” said the Rawai Mayor.

Meanwhile, the community’s leader also commented on the issue.

“I want to insist again that we didn’t break the law or destroy any natural resources. We fish for consumption only and the fight for this case is based on the cabinet resolution which already specifies the types of equipment allowed to fish in national parks such as spears, air compressors and fish buckets.” 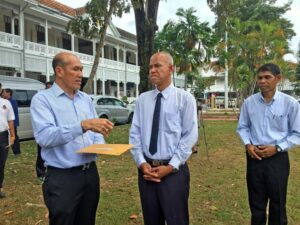 Dante Alighieri Phuket rolls their sleeves up for the elderly