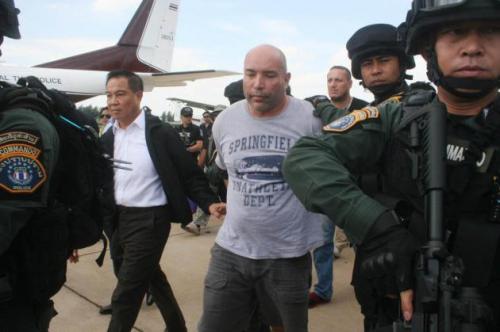 PHUKET: High on the United States authorities’ most-wanted list, Joseph Manuel Hunter was deported back to the US this morning, days after the Prevention and Suppression of Transnational Organized Crime Act was enacted in Thailand.

Mr Hunter, 48, who was arrested in Phuket by officers from Phuket Immigration and the Crime Suppression Division on Wednesday (story here). He was taken to Bangkok after his arrest.

At about 9am this morning, senior Thai law-enforcement officials handed Mr Hunter over to agents from the US’s Drug Enforcement Administration (DEA). DEA agents took him onto a private jet.

“Mr Hunter’s passport and visa were revoked by the US Embassy on Thursday. He is one of the US’s most wanted, as he is allegedly behind several crimes in a number of countries,” said General Preawphan Damapong, the assistant police commissioner in charge of national drug suppression.

“Five other suspects in the Hunter case are being detained in Thailand. However, none of them are American,” he said.

The arrest of Mr Hunter comes a single day after the Prevention and Suppression of Transnational Organized Crime Act BE 2556 came into effect.

Phuket officers were briefed this morning on the what rights the new act gave them when it came to investigating a potential transnational criminal.

“The act came into effect very recently – on September 24 – and with this act, officers tackling transnational crime cases now have the right to conduct searches without having to wait for a court to issue a search warrant,” said Deputy Commissioner General Chongrak Chutanon who chaired the meeting today.

However, law-enforcement officers are still required to present their ID and documentation showing that they have reason to suspect the individual and carry out the search.

“This new Act will make our work easier and life for international criminals and fugitives more difficult, as they will have less time to flee the long hand of the law,” said Lt Gen Chongrak.

All invited to Islamic New Year fiesta in Phuket Town