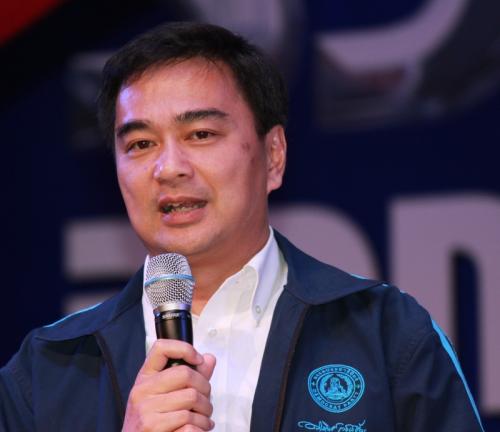 Thai Army ready: We shall fight them in the kitchens
Phuket Gazette

PHUKET: The Royal Thai Army has declared war on pad kaphrao. A sign banning the spicy stir-fried basil dish has appeared in the canteen at the Office of the Army Secretary in Bangkok. Evidently senior officers disliked the odor created by all that garlic and chilli commingling with basil.

Complaints had been filed against the canteen about the smell, so staff tried to fix ventilation hoods over the food stalls that were making the pad kaphrao. It didn’t help – the odor was still wafting into officers’ quarters. The only answer was to reassign the dish to an inactive post. “If you want pad kaphrao you can go have it somewhere else,” Army Chief General Prayuth Chan-ocha said.

On the social media, there was speculation that kaphrao is now categorized as a chemical weapon, and laments over the Thai Army being so weak that it surrenders to foul odors. The military has its sympathizers, though – mostly people who can’t stand the smell of durian. “You must understand that, in the canteen, so many people would be ordering pad kaphrao that the smell would be overpowering,” a Pantip.com poster named Mander pointed out.

PM advised to hold off on bill
Phuket Gazette

PHUKET: Democrat Party leader Abhisit Vejjajiva yesterday called on the government to delay the charter amendment bill as it was pending outcome of a judicial review.

“Prime Minister Yingluck Shinawatra should wait instead of risking the consequences by submitting the bill for royal endorsement,” he said.

Mr Abhisit explained that Yingluck had 20 days to review the matter after Parliament votes for the final passage of the bill today.

He warned that if Ms Yingluck decides to seek HM King Bhumibol Adulyadej’s approval, she might end up having to take responsibility if the Constitutional Court ruling determines that the bill was unconstitutional.

He said he expected the high court to issue a ruling within 20 days, adding that if the judicial review takes longer, then the court might issue instructions on how the bill’s submission to the Palace can be delayed.

Today, Parliament is scheduled to convene and vote on the final passage of the bill, which is designed to turn the Senate into a fully elected upper chamber. The opposition contends that such a transformation is unconstitutional.

Meanwhile, Senator Wicharn Sirichai-Ekawat has issued an open letter calling for the postponement of today’s parliamentary vote on the bill. His argument is that such a vote cannot take place before the high court rules on the issue.

Ms Yingluck, meanwhile, has declined to comment on the issue, only saying that she will attend the parliamentary voting session after she has completed inspecting flood-hit areas.

PHUKET: Three giant modern-trade operators – Tesco Lotus, Big C Supercentre and Makro – have agreed with the Commerce Ministry to freeze or reduce the prices of more than 2,000 consumer goods and foods until the end of the year, as part of efforts to rein in the rising cost of living.

The three retailers yesterday met with Deputy Commerce Minister Yanyong Phuangrach and promised to set up special promotional plans for essential products, so that consumers do not have to shoulder higher living costs.

Minister Yanyong said goods prices should not increase for the remainder of the year as a result of the campaigns being launched.

The modern traders have agreed to either freeze their prices, or to discount them by 10 to 50 per cent.

To ensure living costs do not rise further, the ministry has also obtained the cooperation of 5,955 food retailers and street-food traders that they will sell their wares at 25 to 30 baht per menu item, he said.

Salinla Seehaphan, corporate affairs director of Tesco Lotus’s Ek-Chai Distribution System, said Tesco had agreed to draw up a cheap-price promotion for the remainder of the year at its more than 1,500 outlets nationwide.

The promotion will focus on fresh vegetables and fruits, which will help farmers as well as reduce people’s spending costs for the upcoming vegetarian festival.

Kudatara Nagaviroj, director of corporate affairs at Big C Supercentre, said the company would lower the price of its cooked food from 29 baht per menu item to 22 baht.

Siriporn Dechsingha, associate commercial director of Siam Makro, said the company would focus its cheap-price campaign on ingredients in order to reduce the production costs of food retailers and restaurants.

Makro will also maintain the prices of its house-brand products, and is scheduled to run a low-price campaign during November 13 to 26, said Mr Siriporn.