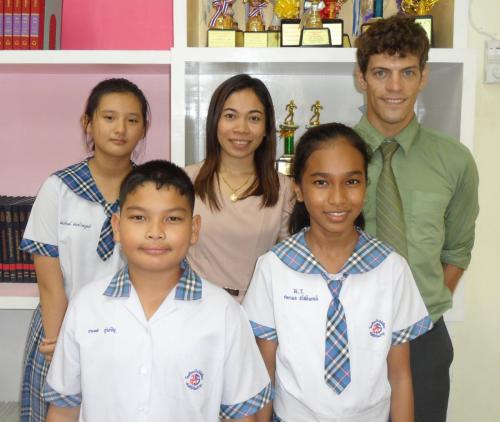 PHUKET: Three 11-year-old Phuket students will be competing in a national English-language competition in Bangkok this weekend after having come in second place in the southern regional competition in June.

The primary school students, Fonthip “Plo” Tanphaibul; Satakamon “Mona” Sawasdiphat; and Poramate “Fluke” Phuchareon, began working on their 20-minute group presentation about the Phuket Heroines in May, and are now ready to stand before the judges of the National Academic Competition at Maung Thong Thani in Bangkok and share their local heritage – in English.

“They’ve been working hard. They’ve added to the presentation since last time. As long as they don’t get too nervous they’ll be fine,” the student’s academic adviser, Steve Garner, said.

Mr Garner explained that English-language competitions such as this one were great confidence builders.

“Mona, she is a shy student, and it helped inspire her to be more outgoing. So anything positive that comes of it is good,” Mr Garner said.

Fluke explained to the Gazette over the phone in English why being able to speak English is so important to him.

“Because we can speak to other people who are not from Thailand, who are from another place,” Fluke said.

Ross Robinson, the students’ science teacher who accompanied the students to the regional competition, will be joining them in Bangkok after they receive a few more pointers from Mr Garner.

“Fluke told me what I also believe about history, that it is important to know about your past so you can look forward in the future. A six-grader knowing – that is pretty cool,” Mr Robinson said.

“I think in Phuket that it is nice to know who is Heroines here, because they help so that Phuket is not in Burmese,” Ploy said during an unrehearsed phone conversation.

One of the biggest difficulties the group faced was going out to research the history of the Heroines and translating that information into English, said Ploy.

No matter how the students do this weekend, both Mr Robinson and Mr Garner made it clear they were proud of the English-speaking trio.

“I always tell them that even though it’s a competition, they are there to enjoy themselves. I never like to put too much pressure on them. It’s not a win or lose thing, it’s about them enjoying the experience,” Mr Garner said.