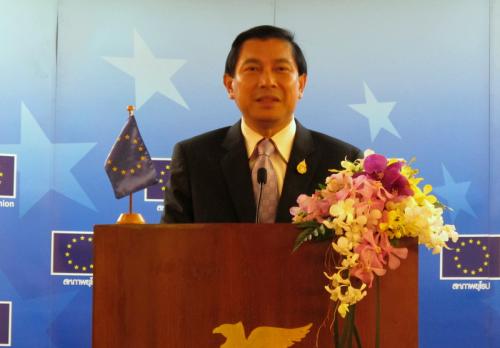 “The meeting today was held to identify several key issues affecting European tourists to Thailand and to come up with solutions to these problems,” said European Union (EU) Ambassador to Thailand David Lipman, who led the 18-ambassador delegation.


At a press conference after the closed-door meeting, Phuket Governor Maitri Inthusut explained that an “incremental” approach was being taken in improving Phuket’s road transportation for tourists.

“We are working with local authorities in developing several key aspects of road transportation. We are working on providing public bus services and on improving the taxi situation. It will improve gradually,” he said.

He added that the same approach was being taken in improving boat safety.

A key factor in improving tourists’ safety while in or on the water around Phuket is having tourists understand the warnings and safety information provided, Italian Ambassador Michelangelo Pipan pointed out.

“Having the same flag out all the time [indicating whether or not it is safe to swim] during the monsoon period, doesn’t help. People disregard it,” Amb Pipan said.

“Also, having beach guards issue inappropriate warnings causes problems of their own,” he added.

However, Amb Pipan said the Governor has assured him that his office had called on local government agencies to boost maritime safety.

“The maritime authorities, including the Marine Police, have been alerted to this problem [boat safety] and are taking action to make it safer,” the ambassador said.

“We are working with all the appropriate authorities in having the right agencies giving the right warnings to tourists, posting the right flags and making sure the right personnel are on the beaches,” he said. “Hopefully, this will result in less deaths in the future.”

Amb Pipan did recognize the Governor’s comment that tourists are often determined to enjoy water activities while on holiday, sometimes at their own jeopardy.

“Many tourists come to Phuket specifically to enjoy the beaches or to go out on a boat. This can be problematic,” Amb Pipan said.

Asked what confirmed action will follow today’s meeting, EU Ambassador Lipman said the quarterly meetings between the honorary consuls on the island and Phuket’s top officials will resume in the near future.

“Also, after this meeting today, we will share these concerns with other ambassadors and government officials in Bangkok to work together to come up with solutions,” Amd Lipman said.

“We will also be meeting the Tourism Minister [Somsak Pureesrisak] on about June 28,” he added.

Governor Maitri urged any tourists who find themselves in need of urgent assistance to call the Governor’s Office directly.

Phuket on the cards to host Thailand’s F1