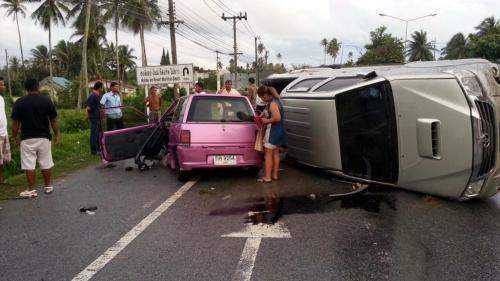 PHUKET: A pickup truck collided with a car on Thepkrasattri Road last night, trapping the driver of the car in her badly mangled vehicle for more than 30 minutes.

The pickup truck driver, Rapeeporn Chonlasi, told police that while heading north, she lost control of her vehicle on a curve and crossed the median trip into southbound traffic.

When police arrived at the site of the accident, about 400 meters from the entrance to the JW Marriott Phuket Resort and Spa in Mai Khao, they found the pickup lying on its side.

“Next to the truck was a pink Daihatsu Mira with the driver trapped inside,” said Capt Santi Prakobpran of Tah Chat Chai Police.

“Saowanee Morpo, 32, could not get out because her left leg was stuck in the console. It took rescue workers 30 minutes to release her from her car,” he said.

“The pickup driver, Ms Rapeeporn, had only scratches and bruises, while Ms Saowanee sustained a broken arm and was suffering from shock. Ms Saowanee was taken to Thalang Hospital, where she remained overnight.

No rest for the weary: Man comes home from work, is busted for drugs