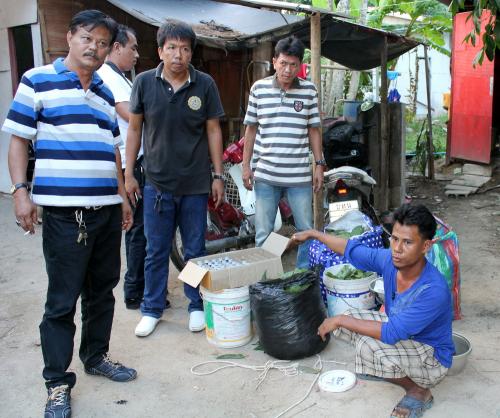 PHUKET: A Myanmar native returned home from work on Tuesday only to be arrested for drugs by Phuket Police officers who were lying in wait at his house.

Police raided a camp in Chalong after receiving a tip-off that workers at the camp were selling kratom leaves.

The workers living in the four houses at the camp fled when they saw the police, who were left empty-handed, said Crime Suppression Division (CSD) officer Maj Rungsak Jaijandee.

Searching the houses, police found 26kg of kratom leaves, 27 bottles of cough syrup and equipment to boil the leaves.

Kratom and cough syrup are ingredients in the popular illegal beverage called “4×100”.

Police decided to wait at the camp for the workers to return, and at 5:45pm, a man named Mr Zugar entered his house and was arrested for possession of a Category 5 drug with intent to sell, Maj Rungsak said.

Kratom busts are continuing in Phuket despite the national-level debate about decriminalizing the leaves. The last two arrests were on September 15, for 4kg and 10kg of the leaves (story here).

Video Report: Driver trapped in car for 30 minutes after crash