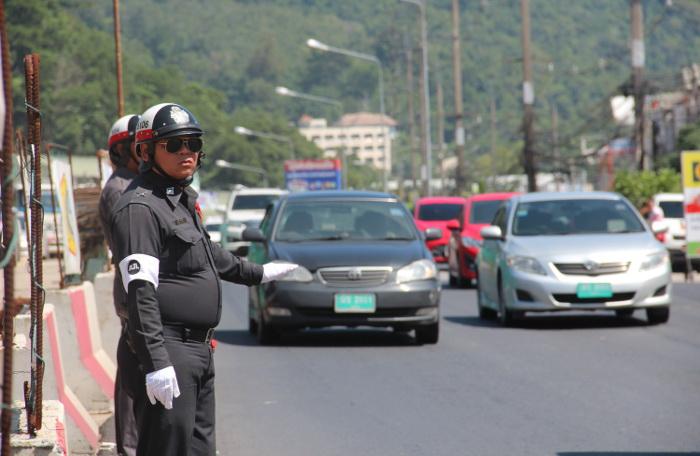 PHUKET: Phuket is among seven tourist destinations in the country undergoing a crackdown on traffic law violations ahead of the Songkran holiday in April.

Since March 1, the Royal Thai Police and its relevant divisions – Tourist Police, Traffic Police, Strategy Division, and Foreign Affairs Division – in collaboration with the Ministry of Tourism and Sports and the Department of Highways, have been strengthening the enforcement of traffic laws on motorists and motorcyclists.

The key traffic rules and regulations under the campaign include driving on sidewalks; driving without a licence; driving against the traffic; failing to give way to pedestrians at crossings; driving without wearing a seatbelt or helmet; careless or inconsiderate driving; driving under the influence; illegal car accessorizing; and parking in prohibited spaces.

The government announced in late January that it was asking police to tighten enforcement on traffic rules and regulations across the country as part of a broader effort to upgrade safety and security standards, and to boost trust and confidence among the public.

A representative of the Tourism and Sports Ministry said the tighter enforcement will help to reduce accidents, especially during next month’s Songkran Festival, when millions of local and foreign tourists will take to the roads.

Next month, more minivans from China are expected to cross into the Kingdom, especially in the Northern region. Boonsong Techamanisathit, governor of Chiang Rai province, said immigration officers at entry gates would provide driving manuals and advise drivers on the tighter law enforcement.

Phuket has seen an influx of recreational vehicles (RVs) from China. These types of travellers roaming about the island under their own steam has had local tourism officials worried that they may not be the kind of ‘quality tourists’ Phuket aims to attract as they are not spending money at resorts.

Phuket Land and Transport Office Chief Policy Adviser Jaturong Kaewkasi said most of the RVs in Phuket were breaking the law.

“Some of these motor homes are illegal because they have failed to be registered with the Land and Transport Office before entering the country. Additionally, it is possible that some of the drivers are not carrying the necessary driver’s licence,” Mr Jaturong said (story here).

Meanwhile, Sukanya Sirisopokakit, director of the Chiang Rai Transport Office, said all vehicles, including minivans from China, were required to buy third-class insurance before entering the country.