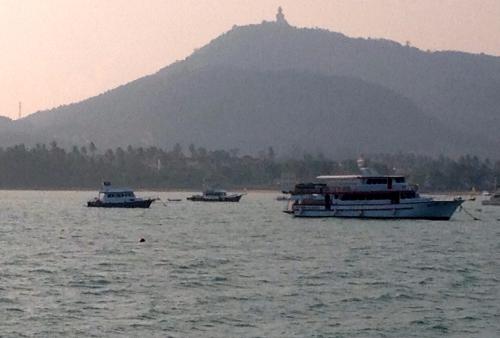 “I inspected the site and confirmed that the mooring is not inside the approach channel [to Chalong Pier] – and we are not considering moving it,” Mr Phuripat told the Phuket Gazette.

He also urged boat captains to not “take a shortcut” out of the approach channel.

“I understand that it might save time, but it risks damaging your boat,” he said.

Mr Phuripat admitted there were many other unmarked moorings lurking beneath the water’s surface in Chalong Bay, and that his office had no idea where those mooring blocks might be.

He did not explain how boat captains seeking to anchor or moor their boats in the bay could safely navigate the waters outside the approach channel.

“The problem we are facing is people keep cutting the buoys off. I have no idea why they do that, maybe for money,” Mr Phuripat said.

“It is a complicated issue, as we cannot keep replacing missing mooring buoys forever.”

During the inspection yesterday, Marine officials tied a new buoy to the mooring that sunk the Lady Andaman, which will allow helmsmen of other vessels to safely see the mooring marker on the surface of the water.

“We can’t track the location of every mooring we dropped and we don’t have a map for local captains to use, but this is no excuse – all boat captains know where they must sail their vessels and they should not take any shortcuts,” Mr Phuripat said.

The hidden moorings in Chalong Bay have remained a serious safety issue over the past year. On February 26, the tour boat “Booze Cruise” collided at low tide with an unmarked block in the middle of the approach channel to Chalong Pier (story here).

Not two hours later, a speedboat carrying tourists from Chalong Pier to a popular island resort off Phuket struck an unmarked mooring in the same location.

Popular Phuket yachtsman Richard Spraggs, from New Zealand, paid with his life for a boat collision while moored in the bay. He drowned in the early hours of January 25 while trying to reposition his yacht, which had drifted too close to another boat (story here).

Despite the ongoing damage to boats and loss of life, Mr Phuripat has held fast to his opinion that no further action needs to be taken to make the moorings safe (story here).